A Boot of Choice 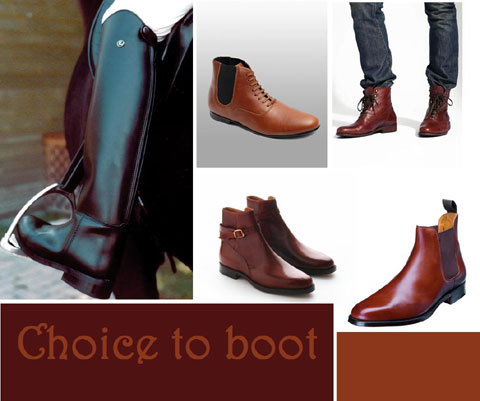 London experienced a little snow recently. I say a little as it amounts to a mere sprinkling in comparison to the measurements some countries have to cope with each winter. “We are not used to snow” harped the local politicians, journalists and representatives. Our ill preparation was embarrassing; too little grit or salt, no emergency measures to remove ice from the pavements, and, in the interests of health and safety, the closure of most of London’s transport networks – for at least a day. The first day of snow was odd – streets empty except for a few cars, lunchtime restaurants and takeaways blissfully queue free.  Faced with about a foot of snow, and the awful brownish slush that follows a procession of human feet, I decided to wear boots with a little grip to avoid slipping, and to provide a little support should I twist my ankles on the icy slabs. The trouble with my selection was that they weren’t quite as practical as they were appealing.

Few people wear boots these days. Chelsea boots are somewhat popular, a few lace up varieties are worn by the younger generation but generally speaking, the poor old boot has had its day; the modern footwear crown belongs to the shoe. It’s a shame as there are many varieties of boot, some of which offer more than a practical function in bad weather conditions. The riding boot, rarely seen but very dramatic, offers an equestrian elegance to semi-casual ensembles. With certain items they would look rather ridiculous but, in the right setting, there is nothing to match their grandeur. They accompany khaki, cream and army green colours very well. The beauty of the burnished bridle leather wrapping the lower leg makes them an item of footwear for the very daring; stable activities aside, this sort of boot deserves to be worn.

Other stout footwear appropriate for use in inclement weather includes the lace up boot. This type of boot has altered from a practical everyday item into a street ‘trend’; Timberland and Caterpillar producing ghastly designs that epitomise cumbersome and inelegant footwear. There are alternatives, like those pictured, that offer a more subtle, retro version of a laced boot. The way they are worn here is to me, personally, a little affected and rather obvious; it would be far smarter to wear them well laced with the trousers covering the boots. However, those who have more Bohemian, contemporary tastes may consider the stuffing of the trousers into the boots rather different and eye-catching; it all depends on individual taste.

The other option is to plump for a boot that offers comfort and support but the elegance of a shoe. Chelsea boots are one of the most popular styles and, although they offer less traction than a properly practical lace up boot – as most are not produced with a ‘commando’ sole – they are usually rubber soled which is useful when traipsing through icy, slippery streets. They are of a peculiarly plain, and some claim ‘timeless’ design, and that has prompted some to tamper with the formula; examples above include Chelsea style boots with laces and buckles. Frills that perhaps possess little purpose except to excite the maximalists who prefer a little decoration on their footwear.