A Case for Fashion Illustration 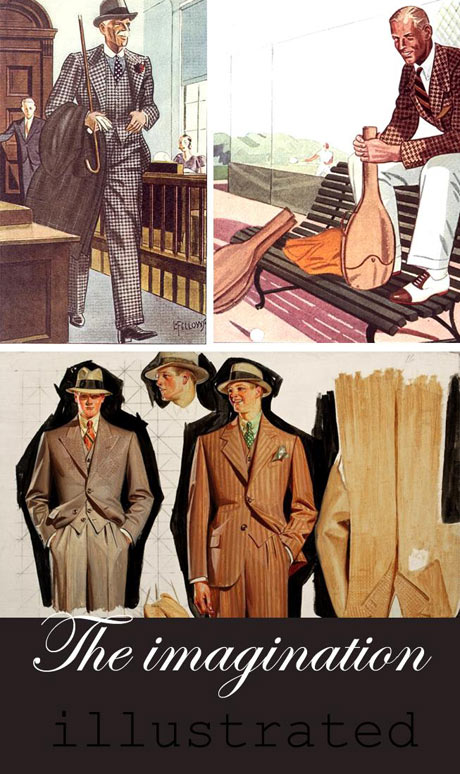 One evening, I sat down for a drink with a friend and a female acquaintance of his outside one of the many restaurants squashed into the tiny and oddly un-English Heddon Street, just west of the bustle and beeping of Regent Street. After small-talking pleasantries, I asked the acquaintance what she did for a living. “I’m a fashion illustrator, among other things” she said in a politely searching and uncertain manner, which suggested the majority of those she communicated with needed explication. This is hardly surprising. Fashion illustration is not a common pursuit, it is not sufficiently self-explanatory and it is not one of those trades which is publicly celebrated or vilified, which would lend the average man at least a slight knowledge of what the dickens it is all about.

Most people guess that fashion illustration is about ‘drawing fashion’ or ‘drawing clothes.’ It is of course, but then it isn’t; it’s really about drawing ideas. There is no need to illustrate what can be photographed, but there is a need to illustrate what cannot be made. Countless designs of the past, which never made it through the seamstress’ door, are wedged into silent archives; the wash colours fading, the designs forgotten. They represent the full universe of creativity rather than the compact and reduced world of fashion. They are the designer’s electric brilliance transposed to pen and ink; they are the closest thing the fashion world has to artistic individuality.

For in illustration, individuality is defined by what the artist chooses to create. Photography is limited by what is already there. Thus, a photoshoot conducted for Hackett has only the originality of the backdrop and the frame for the art that has already been created. He can only use what has been made and what exists; only a cynic would suggest that Photoshop is an acceptable replacement for the illustrator’s pencil. For it is a mighty pencil indeed, and one which I believe is too little used; where are the artist sketches lining the tailor’s shops? Where are the customers’ sartorial fantasies? Where is that vital connection between art and clothing?

Bespoke clothing is about more than stitching, basted fittings and floating canvas. The snobbery about these elements has led the trade into a never-ending game of top-trumps based on the formulaic accumulation of individual characteristics; who has the oldest shop on the Row? Who offer the most basted fittings? Who uses gold thread to sew the buttonholes? Quality is important but it’s not the only horse at the races. When I went to Cad & The Dandy to have a bespoke evening jacket made, I didn’t turn up with a photograph and a list of requirements; I turned up with a drawing of how I wanted it to be.

With this in mind it is well to remember that not everything that can be imagined is always made which essentially means that not everything that is imagined is ever photographed. Considering the evergreen popularity of Fellows and even Leyendecker, particularly as a resource for bespoke ideas and ensembles, it is odd that others do not make more of the unique power of illustration; to enable the observer to imagine themselves in something that has not yet been made. At the very least, they should make more of the journey from synapse to seamstress; showing the process of creativity adds value to a product. Illustration is the hallmark of creativity and it needs to be utilized far more than it is.