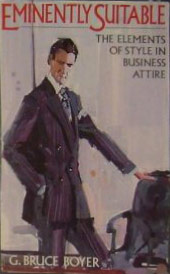 For the modest sum of eight dollars, I recently snagged on Ebay a copy of G. Bruce Boyer’s classic style book Eminently Suitable: The Elements of Style in Business Attire. Boyer is a recognized expert on men’s style, having written on the subject since the early 1980s. He is formerly the fashion editor for GQ, Esquire, and Town & Country. Although published in 1990, Eminently Suitable still has relevance today. If you can find a copy, I would recommend adding it to your style library.

Boyer argues that to be successful in the business world, a man must look and dress his best. Eminently Suitable is a 206-page guide for those businessmen who wish to dress for success. The book includes eight chapters of history and advice on menswear, a glossary of style terminology, and a now somewhat outdated reference appendix on men’s clothing stores.

The first chapter is on Politics, Dress and Image. In this chapter Boyer discusses the history of dress in politics and the image that is portrayed through the attire of politicians. He provides some explanation for the bland American political uniform that I complained about in a recent post. It is through this discussion of political dress that he highlights and stresses the effect a man’s attire has on the image that he portrays.

The second chapter is on The Business Suit. In this chapter Boyer provides some history on suiting and dispenses advice on the appropriate types, colors and patterns of cloth for a proper business suit. In Chapter Three – Drape, Zoot, Drape – Boyer continues the discussion of the business suit by giving some background on the silhouette. The next chapter, Suiting the Man, covers the advantages and disadvantages of ready-to-wear, made-to-measure, and custom suits. In the fifth chapter, Fitting Everyman, Boyer discusses some of the problems associated with fitting clothes to a variety of body types.

In Chapter 6, The Art of Dressing, Boyer discusses the manner in which clothes should be worn. He argues that a man should strive to dress with sprezzatura, a purposeful nonchalance. To that end he advises that “there is no such thing as being ‘accidentally’ well dressed,” that “nonchalance most often depends upon the smaller touches” where subtlety is the key.

The next chapter, Contemporary Design and Designers, provides some interesting history on the development of mens clothing through the 20th Century; however, much of the chapter about designers from the early 1990s is a tad dated (though many of the names are still recognizable).

In the final chapter, Finishing Touches: Grooming for Business, Boyer provides some perfunctory advice on fragrance, shaving, and nail, skin and hair care.

As you may note from this review of the content of Eminently Suitable, the topics covered are ones that we still discuss today on Men’s Flair. The book may be twenty years old, but the content is still relevant. Is there better evidence that classic style is timeless?