A Man and His Technology

Is a smart phone a menswear accessory?

What links those other items is that they have a basic functionality at their heart. That needfulness has seen them increasingly embellished and redesigned to fit elegantly into a man’s wardrobe.

Perhaps the question should be why shouldn’t some sartorial principles apply to mobiles and smart phones?

In matters of dress the golden rule is that a man should wear his clothes not vice versa. It strikes me that as mobiles, smart phones, tablets and their like increasingly become a part of our daily lives, and our wardrobe, they ought to conform to the same principle. Yet increasingly we allow these things to impose themselves upon us, and we willingly cater for them by buying kit that enables us to haul them around the country.

I’ve only written one post here before on the impact of technology on a man’s dress.  Well, in one of those random, wonderful quirks of fate the people at Samsung also saw that post. As a result I was invited to join them as their guest for three days of Olympic fun and games to test out the Galaxy Note smart phone. 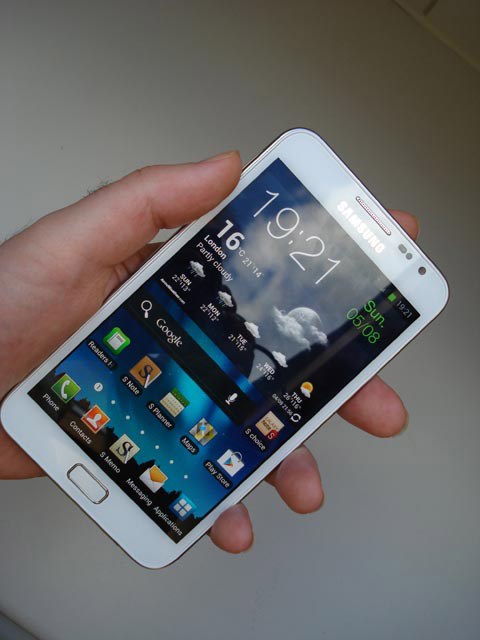 I already have a Blackberry and I despair of the bloody thing. Reading off it is a lesson in eye strain and the buttons are so small that you inevitably push more than one at a time. Though small it’s also thick and heavy, and from what I can tell these tedious features apply to the breed as a whole. Not for me the low slung head and shuffling gait of the compulsive street texter, tweeter and mobile fiddler. I just find it almost impossible to feel any affinity for them.

But I’ve had the Galaxy Note for the best part of three weeks now and it’s the first bit of technology to genuinely impress me. I’ve actually warmed to it, and curiously I gain the same sort of aesthetic pride and pleasure that I get from using my Yard-O-Lead pen or wearing the cufflinks my grandfather gave me. I honestly feel it augments my dress rather than impinging upon it, whilst delivering genuine, practical, mobile functionality as opposed to the illusion of it.

On paper the Samsung Note is an extremely impressive piece of kit.  With a 5.3 inch HD screen and a built in stylus, the Samsung Galaxy Note is a cross between a smart phone and a tablet. Powered by a dual-core 1.4GHz processor & 64GB of memory, it also has an 8 megapixel camera with 1080p HD video recording for all-round media prowess. I use the term ‘on paper’ to provide an air of expert authority. I actually have little idea what any of that means except to say that it’s fast , has a vast number of genuinely useful functions for work and play and a large crystal clear screen I can actually read from, which also allows for buttons large enough for my fingers.

The thing I do least with a mobile device is make calls. Mostly I answer e-mails, read the news and surf. So why do most firms continue to design these things as though phone calls were their primary function?

The Galaxy Note turns all that on its head. For example, the built in stylus (4inches of pure joy) combined with the S Pen holder kit means I can write memos, annotate and edit photos for later reference in my look-book files, do it all on the go and upload it to my website. When I go out to interview retailers and craftspeople I can leave every other bit of kit behind. Genuine hands free mobile living.

But the most wonderful thing is the way it naturally suits my formal and semi-formal wardrobe. About the same size as a coat wallet only thinner, thanks to the even weight distribution over a larger frame the Galaxy Note fits into the inside jacket pocket of my suit without bagging the lining or distorting the silhouette. In terms of the smart phone arms race that’s as revolutionary a step forward as the wrist watch was to the pocket watch.

Now all I’m waiting for is the Yard-O-Lead Galaxy S Pen.