A Shoe That Fits, Part II 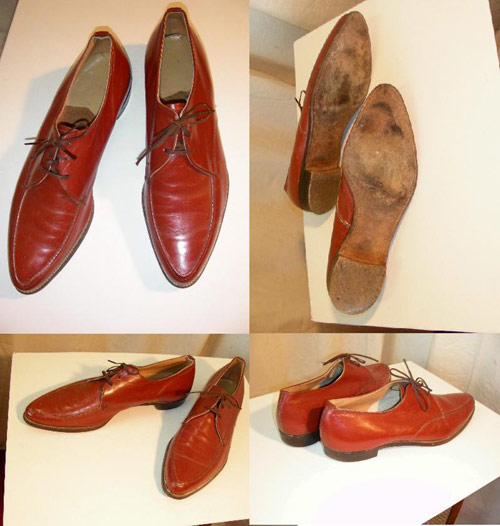 A few weeks ago I shared with you a design of shoe I was considering having made up and offered under my own label. I thought this week I would share another design I’m considering.

As explained before, I have broad tastes and while the last offering came from the early 1960s for this one my eye has wonder further back in time to the 1950s.

The 1940’s had utilitarianism and military styling born out of mobilisation for total war, danger and glamour are curious bedfellows but often accompany one another. You can see many of the influences of the period returning in the form of the recent work wear revival. The 1960’s, well we really don’t need to go into any detail there.

Despite the rationing and dull austerity brought about by national bankruptcy, for a certain generation of Britain’s the 1950’s was a golden age, not only was there a sense of optimism about a future in which technology would increasingly revolutionise life, but once the 1960s arrived Britain would never be or seem the same country again.

Too young to have experienced it, looking back the 1950s seem a rather odd period, and perhaps one eminently forgettable. Somewhat different in the US and else where in Europe, when I think of Britain I think rationing, demob suits and the only break in the straight laced conformity coming from that odd sartorial sect known as the ‘Teddy Boys’ with their brothel creepers, frock coats and quiffs. An odd place to find inspiration you might think.

And then one day while surfing vintage clothing websites I came across the shoes above. Having scoured the internet these photo are the best I can come up with for an authentic 1950’s shoe. At heart an Apron Derby, I particularly like that streamlined shape, which smacks of optimism and modernity. Examining the sole gives a better demonstration of the flowing lines which caught my imagination. I particularly like the narrow waist that gracefully blossoms into the ball of the foot before narrowing to the toe. My immediate thoughts are to reproduce these in either brown suede or a combination of tan calf leather and suede to accompany flannel suiting. In the summer I’d quite like to see these in white nubuck.

Sadly I’m yet to be able to lay my hands on anything other than photos.