A Shoe That Fits

When it comes to my taste in clothes I’m a bit of a pirate. No, I haven’t just fessed-up to some nautical fetish. What I mean is that I tend not to swallow whole any one look. Instead I merely pick off the choicest pieces.

As such I have a broad appreciation of many eras and styles, all of which provide inspiration. As you may remember I’m thinking of setting up my own label, and that’s how these shoes fit into the mix. 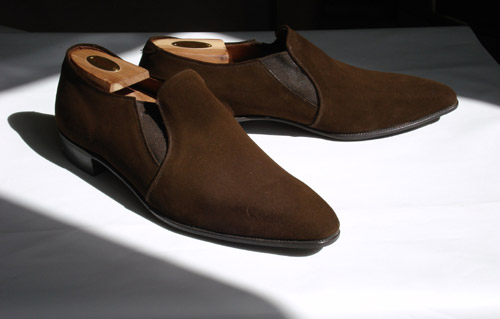 They’re a pair of 1960s suede loafers with leather soles and elasticated sides. I actually picked them up on EBay for £22 not so long ago. Their original owner bought them sometime in the early 1960s, and having got them home from the shop decided they were a bit small. From that moment they sat in the bottom of his wardrobe unused.

A hybrid of the Chelsea Boot and Beatle Boot (named after famous the band for which they were created) the vamp falls just under the ankle. The toe is just slightly chiselled, so they are not a winklepicker; and nor are they the ill-proportioned and exaggerated shoes offered by so many high street retailers, which serve only to make a mockery of the era. 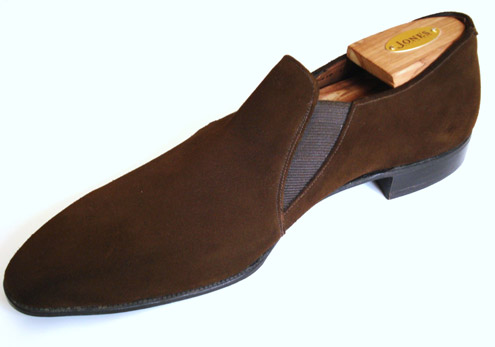 The slim last and close fit, coupled to the close sole make them a sympathetic pairing to the long slim silhouettes of today – just as they were in the 60’s. They work as well with chinos, jeans Harringtons and Pea Coats as they do tailored suits.

While there is more research to be done, I have at least stumbled upon the original manufacturer who happens still to be in business. I imagine having once been in their inventory it wouldn’t be beyond the bounds of possibility to have them re-made from the old plans – with a few tweaks.

While I haven’t entirely made up my mind whether to commission these yet, I think they would make an interesting first offering.