A Stylish Movie: Bonnie and Clyde 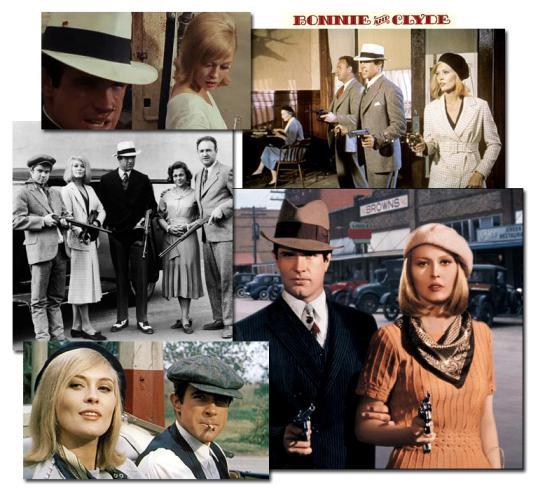 Bonnie and Clyde (1967) stars Faye Dunaway as Bonnie Parker, a bored small-town girl, and Warren Beatty as Clyde Barrow, a small-time ex-con. The movie romanticizes the couple’s string of bank robberies that made newspaper headlines and caught the imagination of the Depression-era public.

Faye Dunaway is lovely in pencil skirts, berets and silk scarves. Warren Beatty is equally stylish in double-breasted suits, vests, spectator shoes and hats. As a touch of sprezzatura, his shirt collars are often askew. It’s odd to watch them rob banks while so well turned out.

One small detail in Beatty’s wardrobe struck me as particularly stylish. Early in the movie he takes Dunaway to town for a coca-cola. While they chat he chews on the end of a wooden matchstick. Several more identical matchsticks are tucked into his hatband. It’s a nifty personal touch like Gianni Agnelli wearing a watch on the outside of his shirt cuff.

In addition to being a stylish movie, Bonnie and Clyde is entertaining to watch. The movie was nominated for numerous Academy Awards including Best Picture and Best Costume Design. In 1998 the movie was placed at #27 on a list of the 100 best American movies according to the American Film Institute.

For some entertainment and classic sartorial inspiration I recommend you watch Bonnie and Clyde.