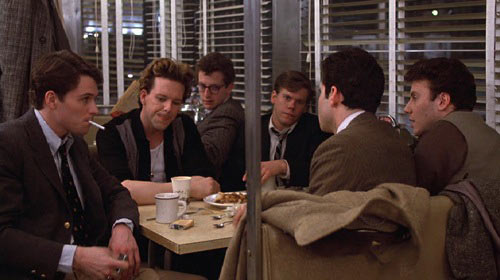 Diner (1982) is a dark and melancholy look into the lives of a group of buddies struggling with the transition to adulthood in 1959 Baltimore. Eddie (Steve Guttenberg) threatens to call off the wedding if his fiancee can’t pass his elaborate football quiz. Shrevie (Daniel Stern) fights with his young wife about the organization of his record collection. Billy (Tim Daly) has a pregnant girlfriend who refuses to marry him. Boogie (Mickey Rourke) is a womanizer with a gambling problem. Fenwick (Kevin Bacon) is an unemployed drunk. Modell (Paul Reiser) is a passive-aggressive mooch. These friends eat French fries with gravy, discuss their respective problems, and engage in much meaningless conversation in their favorite local diner. The movie is sort of like Seinfeld without the humor. For instance, in one scene Paul Reiser ponders: “You know what word I’m not comfortable with? Nuance. It’s not a real word. Like gesture. Gesture is a good word. At least you know where you stand with gesture. But nuance? I don’t know. Maybe I’m wrong.” I can totally see that same monologue coming from the mouth of George Costanza.

Although I found the “plot” to be rather tedious and depressing, Diner is at least a stylish movie. By utilizing thrift-store treasures, costume designer Gloria Gresham did an excellent job of recreating the late 1950s Ivy League look. Imagine lots of tweed and loosened repp ties with tie bars. In one scene Tim Daly wears a great navy-blue Duffle coat over his tweed jacket, tan sweater vest and brown pants. Bass Weejuns complete the outfit. Other small touches include the heavy ring that Mickey Rourke wears on a chain around his neck. Steve Guttenberg wears a wonderful thin, square gold watch with a brown leather strap. Kevin Bacon lights his cigarettes with a silver Zippo lighter and blows perfect smoke rings in the diner. He tools around town in very cool red Triumph TR3.

I find it hard to recommend Diner based upon entertainment value alone, but the movie does provide an excellent window into the roots of the American Trad style of dress. It is also fun to watch this group of famous actors in some of their earliest roles.