All Hail the Chelsea Boot 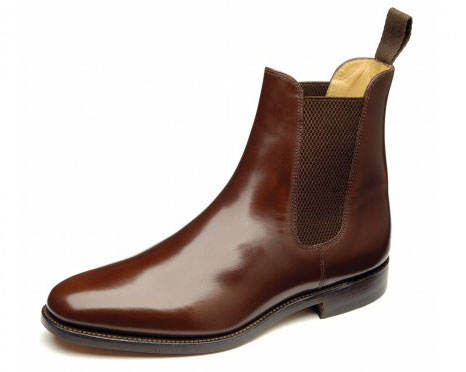 If nothing else, the end to summer was amusing. Traditionally, Britain can always be relied upon to produce the goods when it comes to disappointing weather. And so it was for the fashionistas who descended upon London for London’s September Fashion Week.

Instead of leaden skies, a premature chill and weeping clouds, the inhabitants of Planet Fashion were treated to a rare occurrence; a September heatwave. Most of them were unable to don their carefully selected autumn/winter ensembles due to the risible abundance of sunshine. The street photographers, searching far and wide for wool jackets and rust v-necks, were treated instead to bare legs and seersucker.

Alas, though all of London held out hope, these happy skies did not last. A chilly weekend reminded me that autumn is now in full swing. Back on with the heating, lamps before 18.00, warming whiskies and Nat King Cole and back on with the raincoats, jumpers and Chelsea boots.

As I excavated my cold-weather clothing, buried in the Narnian recesses of my wardrobe, I realised that I had forgotten to replace my now unwearable tan Chelsea boots. Having been subjected to four years of constant use, not to mention rain, snow and anything else Mother Nature cared to experiment with, they are battered beyond recognition. Having been soaked in the wet weather, and despite reasonable care, the leather has crusted and no amount of olive oil or cobbler’s witchcraft can soften the scars.

Searching for replacement boots was not straightforward. I had initially thought about buying brown lace ups instead and scoured the sales for suitable options due to my lack of variation in the boot wardrobe. I found nothing, except the realisation that my wandering from the reassuringly simple Chelsea boot was ill-advised. Everything else seems made for the country; this is the only boot by which a gentleman can make a dignified entrance in town.

Having eyed an attractive pair in New & Lingwood, on sale for £249, and considered the less expensive options in Jones The Bootmaker, whose stock of boots was surprisingly small, I settled on a pair from Loake – the uninspiringly named 290.

The thing with Chelseas is that they don’t look like anything but a boot. They aren’t shoes pretending to be boots or boots pretending to be shoes. They have an honesty and an elegant simplicity that has not been bettered. With a pair of olive cords, navy blazer, Fair Isle vest and pink shirt they provide the ensemble with a degree of equestrian classicism which portrays the balanced look of the gentleman sportsman. With a suit, they convey something different; an irreverent fun-seeker with a touch of rebellion. To be without them is unthinkable.