All My Bags Are Packed 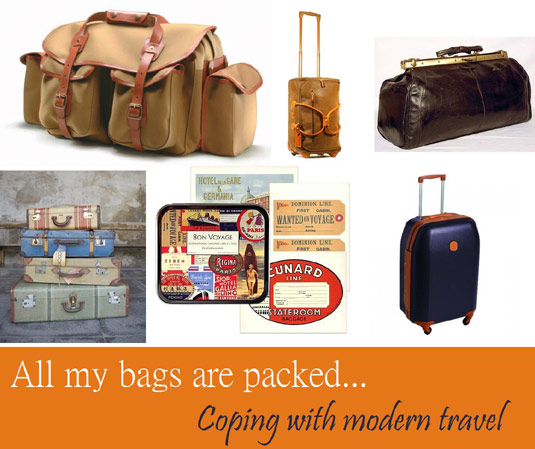 A couple of weeks ago, I was standing by the old lighthouse at Cape Point, near the southernmost tip of Africa contemplating the wonders of modern travel. Had I lived a century ago, I would have made my journey down to South Africa by steamer – a journey which would have taken two weeks. Air travel may well be a less civilised way to transport oneself from one side of the world to the other – the indignity of airports and being strapped inside an airborne metal tube – but such inconveniences pale into insignificance when contemplating the time that has been ‘gained’; so many complain about transit, myself included, that I have found it rewarding to polish brightly each silver lining that one encounters.

However, such reflection can expose the little-thought-of insufficiencies of modern travel, notably the amount and style of luggage that it affords us to transport. I took a modest amount of luggage with me on my recent African adventure and yet it was still extravagant enough to provoke cackles of laughter from my travelling companions; apparently, two checked cases and a carry-on holdall constitutes excess in the 21st century.

The most important thing about packing is that the luggage has to be manageable by one person; outside of deluxe resorts and Orient Express trains, there are no porters to carry portmanteaux to and fro. A four-wheeled case is ideal as it does not require a great deal of exertion, or that the case be wheeled behind (like two-wheeled cases) – four-wheeled cases can be pushed in front with little effort and it is also possible to perch a carry-on on the top of the case to free up the other hand for an additional wheeled case.

While it is understandable that one might wish not to invest in overtly stylish or expensive cases for the hold due to the possibility of loss, damage or carousel theft, there is no such need for caution when it comes to carry-on luggage. Carry-on luggage needs to be robust and it needs to be of a material that ‘enjoys’ aging; nylon is not such a material, leather and strong canvas are. My own carry-on case is a sturdy brown leather Gladstone bag that I bought in Italy. While certainly not light, I rarely get close to the weight limit. If capacity is your concern, a leather trimmed canvas bag might be a better option.

In my opinion, the only camera bags suitable for DSLRs are made by Billingham. In addition to providing excellent protection for camera bodies, lenses and accessories with sturdy internal dividers and foam protection, they also happen to be of a timeless design, unlike many of the camera company bags made of black nylon and plastic. While a Billingham bag is not cheap, they do last and their value holds; many owners sell their old, smaller bags on eBay for significant sums before upgrading to larger models.