An Alternative View of Style

This is a slightly different article to the one I’d intended to write. Originally I was going to highlight a rather unfortunate, and extremely irritating, problem with new online retailer Mr Porter. However, on the brink of having to take them to Court they did what they should have done in the first place and all is now well. Come on guys. It was a credit to a photo, I wasn’t asking you to splice DNA together!

But it got me thinking. We frequently talk about style on this website, and attempt to define it. So many people, media folk and retailers bandy about the word ‘style’ as though merely saying it often enough made it so. Slick expensive advertising campaigns mean nothing to me. A retailer may stock some beautiful clothes but its ‘all the gear, no idea’ if they can’t conduct themselves in a manner that matches the rhetoric.

I’m sure we’re all familiar with the famous quote by Mark Twain that “Clothes make the man. Naked people have little or no influence on society”. No pun intended, but Twain was very wide off the mark. 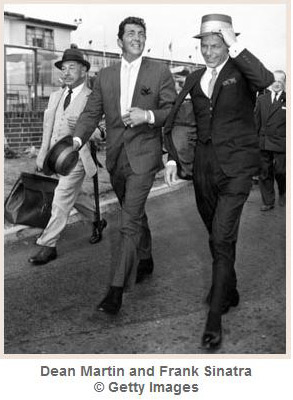 When British actor, raconteur and man of style David Niven died the porters of Heathrow Airport sent a wreath of flowers to his funeral. Attached was a note that read:

“To the finest gentleman who ever walked through these hall’s. He made a porter feel like a king”.

True style is as much about behaviour, or attitude, as it is the clothes you wear. Some of the most unpleasant people I’ve ever encountered had wonderful tailors. Take, for example, the famous photo above of Dean Martin and Frank Sinatra arriving at Heathrow Airport. I’m sure we agree both men look suburb, and their talent, exploits and dress are celebrated. They are adored, and both are regarded as icons of style. But by all accounts Frank Sinatra had a fierce temper and would frequently threaten hotel porters and the like with a visit from his gangster mates when displeased. Conversely, Dean Martin – that womanising drunk we all know and love – drank apple juice on stage and slipped away from parties early to watch TV in his bedroom, like the happily married and faithful man he was. Changes the nature of that picture doesn’t it. Well it does for me; one has style the other is merely a pretender.

Too often when we talk about ‘style’ our terms of reference hone in on the kit and that alone. It is an affliction shared by individuals, magazines and retailers alike. That’s why, for example, I’d rather read The Rake magazine over GQ, or shop at an independent retailer.

Last week I visited Erlend at Stephan Shirt’s. He really is a lovely man of infinite good grace, for whom nothing is too much trouble. Everybody who comes in is made to feel special and treated with the utmost care and attention. I’ve recommended him to friends and they all share that opinion. For me a visit to Stephan Shirts is a pleasant hour spent discussing men’s clothing and world affairs. Something similar could be said of Nino Santoro and his sister Angelica at Nino’s Shirts. Such things are easier for bricks and mortar businesses, but online retailers could certainly take a leaf out of Adrian Herring’s book at Herring Shoes. He, for example, likes to handle complaints and queries personally, despite selling shoes all over the World. Each pair of shoes is cleaned before posting and arrives complete with complementary shoe horn, bags and polish. People who care about people, selling beautiful things fairly priced. The way it should be done.

I suppose what I’m saying is that in my view ‘style’ is and must be the tangible and intangible; and it isn’t something you can buy, sell or fake.