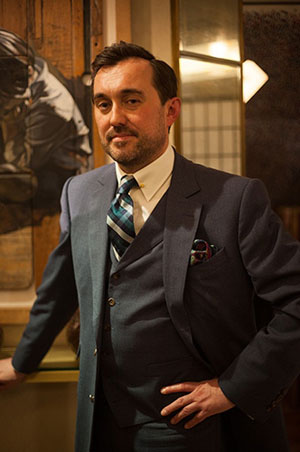 Let me introduce you to Mr. Christopher Modoo, Creative and Buying Manager at Chester Barrie, who’s work in transforming the brand’s tailoring (and casualwear collections) in recent years, has led to Chester Barrie’s fast becoming one of the most desirable names in luxury British tailoring. Chris was kind enough to invite me to his Savile Row office, which adjoins the company’s flagship store at No. 19, so that we could chat about his style, his influences, and what it is that drives him to create such impeccable British clothing.

After a quick look through some of the exquisite pieces in the Chester Barrie showroom, we settle down with a coffee and Chris begins to enlarge upon the development of his career; it makes for fascinating listening. Despite a passion for tailored clothing from a very young age, his route into fine tailoring was an unusual one: ‘It was never a career option, no one picked it for me – I spent the first few years of my working life as an unhappy, overdressed bank clerk’.

Clearly, something had to be done. After only a few months in the bank, he accepted a job in Selfridges’ accounts department solely for the 40% clothing discount. A few months in, he realised that ‘I could get the same basic salary and clothing discount, plus commission on the sales floor’. Chris went straight into the men’s shirting department, introducing him for the first time to the world of high-and menswear retail, and a year later at the age of 21, he was asked to take on the role of Thomas Pink’s Selfridges Concession Manager – a dream job – ‘I couldn’t believe I got paid for it, ‘it was so refreshing’.

After some years working as a Manager with Thomas Pink, Chris moved to Ede & Ravenscroft, taking on the task of developing the brand’s then brand new ‘Personal Tailoring’ service, no small feat as it turned out. In addition to adding this string to his bow, working in such a formal house has given Chris an expert eye and understanding of British formalwear. ‘I’ve always been passionate about formalwear, I loved learning about its etiquette, conventions, rules and history. I have respect for French tailors, Italian tailors, American tailors – they all have their own strengths and aesthetics, but the British just do formalwear so well’.

Clearly, Modoo knows what he’s talking about: ‘I got to style formalwear for the Royal Household, I used to go to Windsor every year, I’ve dressed most of the Orders of Chivalry in morning dress, I’ve provided clothing for academic awards and OBE ceremonies at Buckingham Palace. When you see formalwear worn in that environment, you see how its done at its best, worn in a comfortable way – you see how it really works’.

Having moved on from his successes at Ede & Ravenscroft, over the last few years at Chester Barrie, Chris has worked in buying and designing the company’s handsome off-the-peg collections, a role in the company which has been highly informed by his extensive, personal experience with bespoke tailoring. Shortly after taking his job at Selfridges, Chris started to have things made, and very quickly gained a comprehensive technical understanding of the art of tailoring, and an eye not only for what worked well and what didn’t, but what worked well with style. ‘I tried everything; over-accessorising, too much use of colour, huge peaked lapels, high gorges, low gorges, double-breasted waistcoats, turn-back cuffs on everything, trouser waists too high, trouser waists too low, trousers without pockets [he pauses]… don’t try that!’

With this in mind, as we talk through the cut and shape of a Chester Barrie jacket, Chris waxes lyrical about his own personal philosophy of designing a tailored garment. ‘Its all about balance. All the garments we design have to balance perfectly; I look at a jacket block and I know that if I want big peaked lapels on it, then the shoulders need to be strong to carry them, and the pocket jets need to be in proportion.’

Indeed, between Chris and his co-designer, the venerable Edward Sexton (who acts as Tailoring Consultant for the brand) everything is meticulously crafted, measured and tested. Lapel gorges, pocket shapes, the fullness of the chest, the strength of the shoulder, the suppression of the waist and the rise and drape of the trouser. This is a philosophy of precision which informs everything Modoo designs. ‘Its all about mixing colours and textures, shirts and ties also need to balance against suits – not just in terms of shape – but also stylistically. Just mixing it up a little bit using pops of colour to add some creativity – always in good taste.’

Talking of good taste, we get onto Chris’s own personal style influences. ‘My father was a huge influence on my dress – he was a Mod. The Mods were truly fastidious. Every element in their dress was considered, it wasn’t just about throwing on an expensive suit. He always cared about his clothes. He taught me to look after my own clothing and value personal pride in appearance. He was so fussy he used to wear starched collars’. In keeping with his young love for tailoring, Chris also thoroughly enjoyed dressing formally for sixth form: ‘Sixth Form was also an important time for me – we had to wear suits – and the most exciting part of the day was deciding what to wear’.

The conversation turns to Savile Row itself and Modoo is filled with nothing but optimism, ‘I’m a huge fan of Savile Row and its a good time to be on the Row right now. Savile Row has become a part of London fashion – the decision for Savile Row to exhibit at ‘London Collections: Men’ was brave, but an excellent move’. He does however, have a word or two to say about the broader London tailoring scene. ‘Savile Row is the pinnacle of English tailoring, and so it should be, but I’d like to see a London tailoring scene that isn’t marginalised by Savile Row. There are so many good city tailors, and presenting a united front to the customer would help make the tailoring market seem less niche.

‘Also, alterations. Department stores should invest more in good alterations tailors and offer a real service. The experience of an alterations tailor shaping and pinning a garment with a customer – not just hemming trousers – increasing interest in tailoring making alterations a natural part of buying a good suit off-the-peg.’

Having sat in conversation with him for over an hour, evidently Chris understands his business, and understands the need for Savile Row to continually develop and evolve. Likewise, dressed in his impeccable royal blue suit, with a crisp white tab-collar shirt, perfectly standing slim checked silk tie, and subtly contrasting paisley pocket-handkerchief, Modoo truly understands fine tailoring and understands British style.