Of the multitude of fabrics offered for sale; the miles of natural, man made and combination material, linen is surely the most ancient and certainly one of the most enduring. It is strong, long lasting and attractive and though it has certainly ‘had its day’, it is still popular for its character, coolness and practicality.

Admittedly, I do not possess much in the way of it. My linen collection is small and entirely seasonal although this is rather common, and indeed customary, for those even in ownership of overly substantial wardrobes. Linen, like silk, is a minor feature in the gentleman’s clothing closet. The years when fine white Irish linen shirts dominated the fashionable scene are gone; linen is now seen as a novelty.

Compared to cotton it is expensive and, though certainly stronger, less manageable. The crumpled linen shirt may be charming whilst sipping a Chianti on a terrace admiring the view from the hills surrounding Florence, but the lack of elasticity in the fibres becomes rather tedious when it gets down to the practicalities of the work place.

There is undoubtedly something honest and organic about it. And like silk, it is easily identified with the merest of touches and, for what it lacks in all-round convenience, it makes up for in character.

For character is where linen really excels. I rather like to think of it as a tired and old grande dame; though creased and unrefined, still captivating onlookers with texture and spirit. What other material can be worn untucked and a little frayed and flabby at the edges?

Cotton may be an excellent all rounder but compared to linen it is high maintenance. Cotton needs primping and fuss; a shirt or suit, otherwise respectable, is utterly ruined by evidence of the wearer’s repose. Linen is seemingly impervious to the negative effects of reclining. It certainly creases but somehow, it doesn’t matter. It looks acceptable. 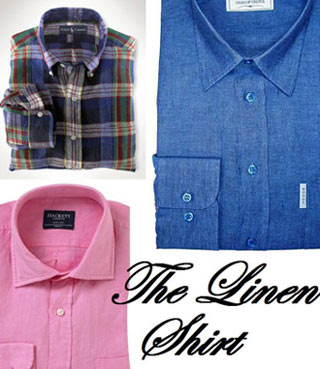 For the summer, the perfect linen shirt is essential. From providing cool protection from the brutal rays of sunshine to cutting a relaxed yet tasteful figure at the loggia restaurant, the linen shirt is such a comfortable choice at this time of year.

The ideal linen shirt is not slim-fitting; somehow the crumpled elegance and manufactured fit do not sit well together. It should not be oversized and baggy either, although it is sensible to allow more than a little room between fabric and skin. Although linen shirts are fabulous in pinks, greens, azures and checks there is nothing quite like an ivory for freshness and versatility. 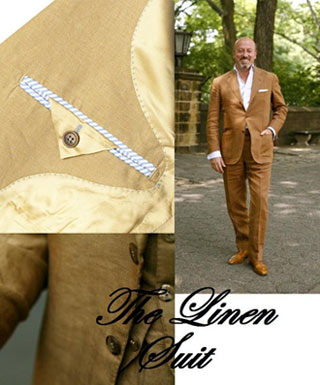 Linen suits
I believe that linen, whilst an outstanding material, should be worn in moderation. Therefore, wearing linen shirts with linen suits is pushing it a tad too far. Contrasts in texture are important – a light cotton shirt is a much better match for a linen suit. And a well made linen suit is a thing of robust beauty: there is something so indescribably luxurious about the way a floppy but tailored linen trouser falls against well-burnished shoe leather.

Whilst they are more prevalent now in two button form, a well-fitting three button linen suit (creating the ‘X’ shape when the middle button is fastened) is also very elegant and, due to the fabric’s durability, it will serve the wearer well for many years. For the proverbial cherry, a woven silk pocket square would add a further Titian-esque dimension of texture to the ensemble.