The Artist Behind The Images: Andy Barnham 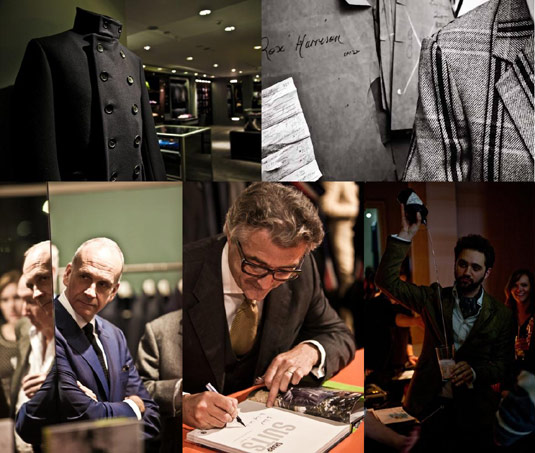 Having recently posted an article on Berluti, I was contacted by said firm this week asking to use one of my photos for future PR purposes. Rather flattering, I’ll confess I didn’t think my photos were that good.

After several years of blogging you’d think I’d have learnt a trick or two on how to take a good photo, but I’m still clueless. It’s far harder than you imagine.

There is a real art to creating the stylistic images that we’ve all become so accustomed to seeing in glossy style magazines, websites and the more expensive online retailers. The clever people that do this work we tend to take for granted. But they are in my view real artists and unsung heroes. What would these magazines and websites be without them? And how would we spend our spare time?

A couple of weeks ago I had by lucky chance a few pints with one of these hidden talents by the name of Andy Barnham. You may not know the name but you may well have seen his work. A very gifted photographer with a great eye in my view, Andy takes fashion photos as well as ‘lifestyle’ shots at events and openings. His talents have seen him take photos for the Rake Magazine and Lodger to name but two.

But what makes this particular photographer more interesting than most is that he’s had no formal training whatsoever. Andy doesn’t even have a media arts background, and to call him interesting is something of an understatement.

In fact having read Chinese at University Andy then joined the Army,  signing up in the same week as the terrible 9/11 attacks. Commissioned from the Royal Military Academy at Sandhurst he went into the Royal Artillery. In 2003 we was deployed to Iraq for Operation TELIC, then in Cyprus for Operation TOSCA, as part of the UN Peacekeeping Force. Having volunteered to learn Farsi he was deployed to Afghanistan on Operation HERRICK 4, where he was stationed in Kabul. That sounds like enough for any young officer but Andy’s also exercised in the jungles of Belize, on the Kenyan plains with the infantry, in Poland with Tanks and then went back to Afghanistan for a second tour. He did close to 1000 days away in 5 years!

I doubt I could conceive of a more unlikely CV for a fashion photographer if I’d tried. But curiously enough, according to Andy, it was this varied career that led him into photography. He says he’s always had an interest in photography: “I always found the raw emotion of conflict photos incredible and also loved the glamour of fashion photography, but never pursued it; never thought I’d ever have the chance to do it myself either!”

After Sandhurst he bought a small digital camera and started taking pictures in Iraq. He was less than happy with the results, “holiday snaps” is how he described them to me. But he was undaunted:  “I taught myself composition and reportage in an effort to get better shots. I bought a good digi for my last Afghan tour (these shots are on his website) and when I left the army bought a DSLR. Apart from a 3 day course on how to press click, I have no formal training”.

Andy has as of course left the Army now, but I couldn’t help but wonder whether he ever thought his life would turn out quite like this; “I thought I’d end up in the security industry, given my languages, but have found myself in the world of men’s style and fashion photography”.

Personally I think it’s high time we acknowledged the talent behind the lens, and you can view Andy Barnham’s beautiful photos on his website.