It’s difficult not to fall in love with a city like London during the autumn. The leaves that provided sun-dappled splendour in summer now crunch underfoot, scattered across the cobbles and tarmac like Nature’s confetti. The majestic clotted-cream buildings reflect the late afternoon’s strawberry pink light like some monumental meringue, and the cool October wind bites into the tanned skin of summer.

It’s also rather difficult not to fall in love with one’s autumn wardrobe. After the casual linen and cotton days of summer, falling back into the heavy formality of winter wools is a marvellous relief. The substantial jackets, the layering, the soft scarves that brush your cheek. October is always a happy time of re-appreciation. Central heating, which we were relieved to be rid of in April, is somehow fascinating and life-affirming; log fires, which had bored us by February, are once again a crackling theatre of fizz and flame. In summer we longed for natural living and warm weather’s simplicity; at this time of year, the wonders of the indoors sparkle again.

It is possible to get carried away with autumn replenishment. In many ways, selling stock in autumn is easier than at other times of year. The collections draw us in from the cold and tempt us with the reassurance of their utility as well as their design and we suddenly discover an intense need for mustard cord jackets, long scarves and huge cable jumpers that offer not only the necessity of warmth but also an indescribable cosiness that re-engages our senses with the pleasures of sartoria. By December a velvet blazer will be but a boring component of an unnecessarily long winter, but now it is a wonder. As summer’s heat pushed us further apart, autumn’s chill draws us closer together; affectionate hands will be momentarily thrilled by the unfamiliar brush of a velvet shoulder.

Some of the best items to celebrate autumn, and enable us to march confidently into the crimson horizon, are also the simplest. I have already written a paean to the wonderful Chelsea boot, the weekend footwear of choice for the coming months, but there are other staples that deserve a mention. 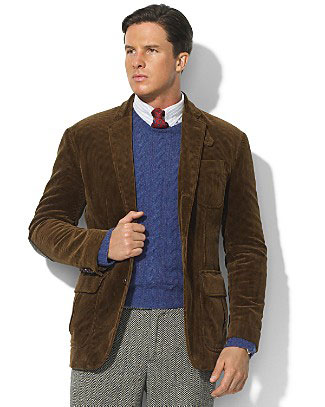 The first is the corduroy jacket, which is to autumn what seersucker is to summer; a go-to jacket for casual and semi-casual occasions that lends a professorial air to ensembles. The best thing about the beloved cord jacket is that it doesn’t matter if it gets a bit battered over time. You can add a couple of elbow patches, which is not something that is possible with most other jackets. The lapels can curl, the sleeves can be rolled up, but it doesn’t seem to matter when it’s corduroy. Its bohemian quality lends it an air of the artist. Add a proud silk puff and the rougher edges don’t seem to matter; it has another character, which is quite unique. 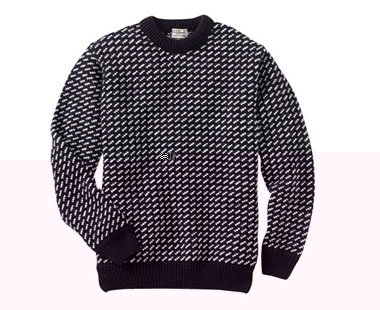 The second item is the fisherman’s jumper, an indulgence for a cold weekend and a veritable radiator for the body. The best thing about the fisherman’s jumper is that it isn’t a fake; it isn’t an item of design pretending to be an item of utility. Rather, it is an item of utility that has developed qualities of very individual design. It isn’t exactly something for decorative dandies, but it doesn’t preclude ornamentation either. Wear a cream cable-knit one with a silk or cotton cravat, slim jeans, oxblood tassel loafers and a warm winter coat for a functional, sporty but surprisingly elegant ensemble.