Back to Basics – The Shoe

In this age of doing more with less, global energy crises, and the Ugg viral outbreak, it is the perfect time to contemplate how many shoes a man should own. The Thoughtful Dresser states a rule, unfamiliar to this writer, that a man tends to believe he doesn’t need more than three. The esteemed Manolo places that number closer to ten. The simple answer is – as many as he wears.

Most men treat footwear as an afterthought, which naturally risks derailing even the most carefully considered outfit. Before even thinking about tie and shirt combinations a man should take stock of what is going on his feet. As a learned friend from law school once opined about two thuggish young men wearing impeccably maintained kicks, “gangster starts from the ground up.”

Nothing works in more situations and paired with more outfits than black leather, whether lace-up or slip-on. Avoid the risk of looking too corporate by going with a more playful option, such as Barker Black’s loafer. 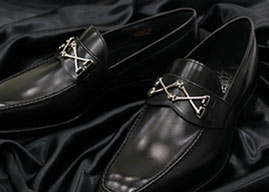 First of all, we can stop calling leather shoes “dress shoes,” as though they should only be used when one is trying to make some sort of impression. If you find yourself dreaming of leaving work so you can take off your shoes, chances are you’re either not spending enough money or are buying the wrong fit. I’ve never understood the logic where you buy five shoes, none of which feel right, instead of spending the same amount on one pair that can last ten years. If you already have a pair in black, a brown pair can give new life to suits and, I am lead to believe, can even be worn without socks in the summer. 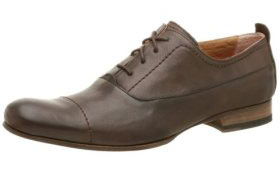 Running shoes are called running shoes because you exercise in them. If you’re wearing them with jeans and a blazer, you are doing them a disservice and causing an existential dilemma. If you’re not going to travel the white leather oxford route, you need a pair of casual shoes that don’t look like you’re headed to the gym.

I’m probably biased as I own five pairs, but for my money Medium makes some of the best looking casual shoes around. I have two of the Expressionist in different colorways.

Are there any shoes that a man should never wear? In Vancouver, apart from the aforementioned Uggs, the ubiquitous socks with sandals combo is a frequent offender. 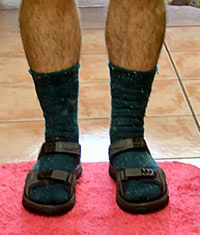 However, I would argue that any three strap sandal tends to make men’s feet, already big and plodding, look like trussed up legs of ham. Which, unless you’re a Roman gladiator, never ever looks stylish.