A friend of mine informed me that they dream of riches, but that those dreams are tempered to the extent that they dreamed of limited wealth; of having to have limits, of having to say no. Considering the mighty elasticity of dreams, it may seem unusual. To wish finitely of boundless freedom and impossible luxury – surely the ultimate is to have seemingly infinite resources to match the infinite possibilities of our imaginations.

However, consider if you will the psychological consequence of possessing limitless wealth; what would there be left to buy? What would be pictured in glossy magazines for us to dream of? Where would our childlike expectation of material fulfilment go? Knowing you can have everything and anything could actually be rather depressing; all the money in the world has no remedy for such feeling.

The wonderful thing about dreams, I have often observed, is that generally speaking they do not come true. They remain, in limbo, in our minds eye, never coming into fruition; they are part of the only perfect landscape we know and we are rarely given an opportunity to be disappointed by them.

This is why I am currently satisfied I do not own a pair of Berluti shoes. As much as I adore them, I desire to remain desirous of them. Bizarre as it seems, I am actually thankful for their reassuring expense. 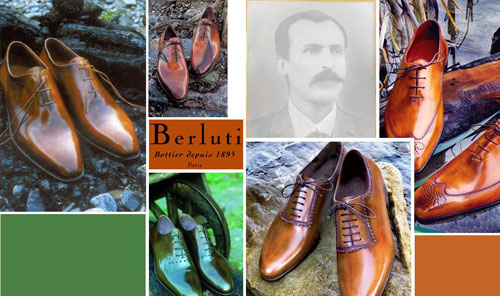 Looking at a pair of Berlutis, as I found out when I ankled round to the Conduit Street store, is actually rather like looking at something that hangs in the National Gallery; it’s an event, a special occasion. There is a wonderful depth to the leather, a fabulous patina; they have the lustre of a perfect piece of antique furniture. Whereas ordinary leather, while serviceable, is the flat-pack copy, Berluti is the real thing. They are like the walnut Gainsborough chair or the Queen Anne chest.

It should be no surprise that such magnificence comes at a price. Shoes, when well made, shouldn’t be alarmingly cheap. The process of hand made shoes, with the use of high quality material, requires expertise and skill.

Indeed, considering Berluti as merely a ‘shoemaker’ is akin to considering Michelangelo rather decent at sketching. Even in comparison to established shoe tailors such as John Lobb, the artistry of a Berluti shoe stands out as something worthy of praise.

The shapes are more avant garde than Jermyn Street cobblers; Berluti is not afraid of the square toe, and yet the beautiful patination is utterly classic. Some shoes, to look at, have very little depth in the material itself. Berluti understands that some demand art from footwear; that there should be a sense of the exceptional about the shoe.

It’s a relief to me that I can still regard Berluti with such awe: that I am not given the opportunity to tire of them or have reason to disparage their construction.

When I was on Conduit Street, I had a lot of fun trying a pair or two in Mayfair and I was sufficiently smitten. However, it would surely eventually tire me if I was given the wherewithal to instruct Berluti to make me fabulous tailored shoes; I would have reached the apogee, the very summit of footwear – everything below it, which means all other footwear, would become lacklustre and unacceptable for wear and that is a snobbery I cannot afford and do not want. Having said that, if I did own a pair, I’d be awfully proud of them.