Beau Ideal: Have You Seen These Glasses? 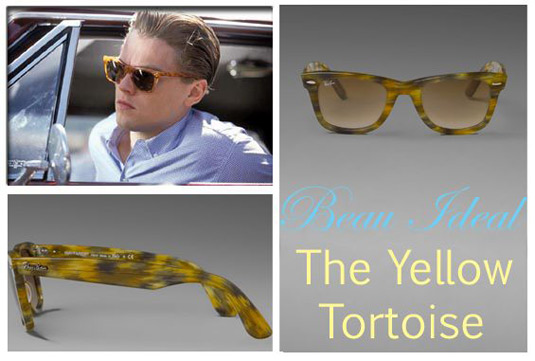 As the advertiser is wont to say, ‘there are some things that money can’t buy.’ When I bought my beloved dark tortoiseshell Wayfarers from Ray-Ban, I had conducted a parallel search for another pair of Wayfarers; the yellow tortoise. Enquiries in even the most vaunted of department stores, including ‘the world’s best department store’ Selfridges & Co, led to embarrassed smiles from staff, furtive gazing at computer screens and the inevitable comments and excuses; ‘current season’, ‘all stock is out’ as well as a feeble attempt at placating an unsatisfied customer with a pair of rather childish bright yellow frames. The conclusion? No money in the world could buy the glasses that I knew had certainly existed but were, for some reason, no longer available.

The idea of the yellow tortoise frames first appealed to me when I watched the splendidly costumed Catch Me If You Can, when a slick-haired Leonardo DiCaprio lurked in a motor car outside an airport wearing a short-sleeved button-down sky blue shirt and a pair of Wayfarer-shaped sunnies in yellowy-tortoise.

Though I have always been a fan of the dark-tortoise Wayfarer, the yellow were happier, more fun. They had a distinctly vintage appeal, reminiscent not only of the original 1950s frames but also the round-frame lenses worn by colonials in Egypt. Though I reasoned that the darker tortoise frames were more versatile – think ‘pool to premiere’ – the yellow were distinctly a daytime, casual frame.

After thousands of searches on eBay and Google, I found a pair of frames in the classic Wayfarer shape at Revolve Clothing that happened to be, painfully, out of stock. The style corresponded closely to that which I had previously seen on a gentleman dashing quickly through the Regent Street crowds one sunny afternoon last year, so I was convinced I had found the pair but, due to the lack of available stock, the ‘beau ideal’ was unachievable. Even the Vintage Frames Shop, recommended by my close friend Barima, offered nothing.

The likelihood was that the glasses were out of production; Luxottica had pulled the plug. The problem was that the paucity of results in the second-hand market clearly indicated they were dearly cherished: something I both hated and admired in the same transient thought.

Disappointingly, an enquiry email to Luxottica did not even generate a default reply. Though initially surprised, dispirited and deflated I have not given up in the search. After all, the hardest won prize is often the most treasured.