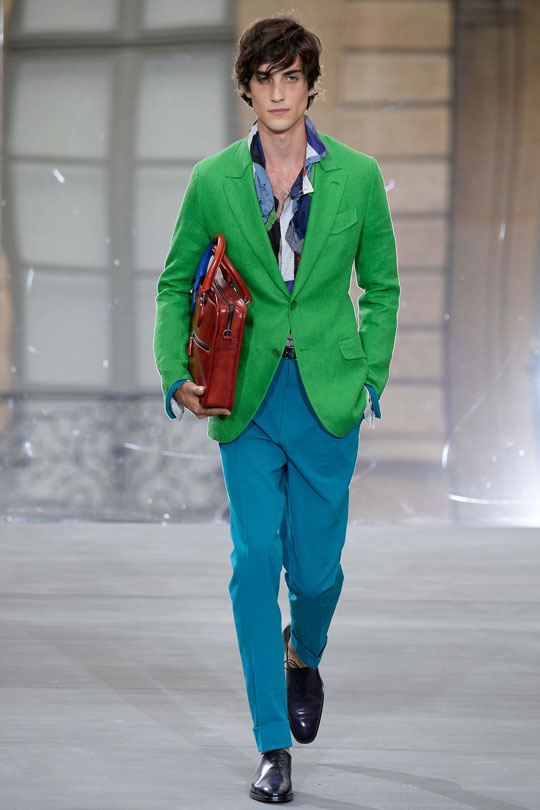 When it comes to tailoring or ready to wear, Berluti isn’t exactly the first brand that comes to mind.

“Shoes, isn’t it?” someone vaguely acquainted with the name correctly guessed.

Special because Berluti is a special brand. The founder Alessandro Berluti was an Italian perfectionist who made last-making an art, crafting beautiful shoes for the beau monde of Belle Epoque Paris, but it was Olga Berluti who turned the brand into the icon, introducing hand-finished patinas in an alarming array of colours.

Owned for 22 years by LVMH, the world’s most formidable luxury group, has both blessings and curses. Chief amongst the former is the financial muscle to supercharge product development and marketing spend; most significant amongst the latter is the incontrovertible and relentless expectation for growth and profitability.

The big problem is, artisanal shoemaking, on it’s own, isn’t exactly a massive moneyspinner. For one thing, it is a craft which takes time; hours and hours of fine handwork goes into making each pair of shoes.

Secondly, as this time-consuming and very human process isn’t scalable, the costs associated with producing one pair are very high, resulting in a low volume business where the only profitability is in a hefty margin – far more difficult in an increasingly competitive environment.

The vision for Berluti since the acquisition has remained focused on its specialism of working with fine leather. Briefcases, wallets and belts joined the fabulous shoes on the shelves; a logical extension – and a less costly one.

However, the appointment of the fortunately named Alessandro Sartori as Artistic Director in 2011 spelled big changes for the brand. A former creative doyenne of Ermenegildo Zegna’s successful “Z Zegna”, his pedigree as a designer is undeniable. Since the launch of its ready to wear collections three years ago, Berluti has been quietly infiltrating the world of fine menswear, buying Arnys tailoring business (who made jackets for Le Corbusier) and turning heads with some spectacularly colourful ready-to-wear collections.

Though always punctuated by shoes – typical of LVMH who never forget the power that heritage can bring to a collection – they are looks that have suggested Sartori shares Olga Berluti’s talent for working with colour, and an appreciation for structure and form that underlines the tailoring credibility of the brand.

The 2016 Spring Summer Collection, shown in an elegant courtyard, emphasized both the playfulness and seriousness of the brand. Playful for its irreverent use of bright colours; serious for its unswerving adherence to sensible proportions and lack of unnecessary, tasteless experimentation. There is nothing bizarre or unwearable in Berluti. It isn’t pretentious or self-consciously ‘artistic.’ The Berluti man may be more European than a Purple Label man, probably more creative too, but he’s no fashionista.

Sartori’s “looks” for Berluti aren’t entirely conservative either. They combine the formal with the casual. There is a suede leather blazer with sweatpants but, unlike previous experimentation in ‘high fashion’, these looks actually work very well and are entirely street-ready.

The other thing is, genuine customers of luxury fashion brands tend to be a little older and a little less gaunt than the ‘boys’ who parade the oversized jumpers, skinny black denim and clumpy shoes of your garden variety Paris-based men’s fashion designer. So much so that the idea of anyone older than 23 wearing any of the creations seems preposterous.

And this is where Berluti really shines; you can actually imagine your father, even your grandfather, wearing most of these looks.  And that’s a big compliment. The tailoring is sensible, harsher critics might even say formulaic, but it is this seriousness that is worthy of respect.

It takes a long time, a lot of money and a sartorial realist with the imagination of a child to turn a Parisian cobbler into a global lifestyle brand but, by the looks of it, Sartori (and Berluti) might be halfway there.