Of all the delightful escapism in this world, sitting down with a bit of Wodehouse is surely one of the most felicitous. P.G. gave us some of the most charming and warmest of characters in the history of literature and, without a doubt, the enduring appeal of the books is the wonderful innocence of the Wodehouse world. The Queen Mother used to read a little of the Jeeves books before turning in at night; Stephen Fry cites Wodehouse as one of his favourite authors and apparently as the lifebelt that prevented him from going all the way under in his dark days of self-doubt and crippling depression. 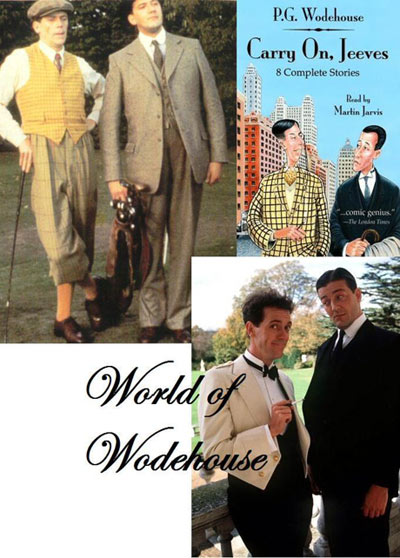 And there, in a nutshell is the wonder of the stories; it’s something to keep a great old lady entertained, skipping off to dreamland with the right cocktail of final thoughts; and something to remind us all how wonderful the world is, despite all the daily plight and anguish. Wodehouse is the representation of the human race on absolutely tip-top form. It’s a tonic to read, wonderful to watch and even acting like your favourite Wodehouse hero or heroine is marvellous fun.

Without a doubt, the most popular of these heroes is Bertie Wooster. Bertie is often believed to be rather stupid; young, very wealthy and completely lacking ambition, he lives an idle life, but as the narrator in the Jeeves series, his mind is actually chock full of amusing and truthful witticisms and observations.

And that’s not all he offers; Bertie is also one of the more appealing dandies in all history; fictional and non-fictional. When Jeeves is introducing his replacement, Brinkley, to the duties of the Wooster household, the less worldly and resentful Brinkley proffers the impertinent statement, on seeing Bertie’s vast and wonderful wardrobe; ‘Got enough clothes, ‘asn’t ‘e?’ Jeeves responds with appropriate dexterity; ‘Very nearly.’ 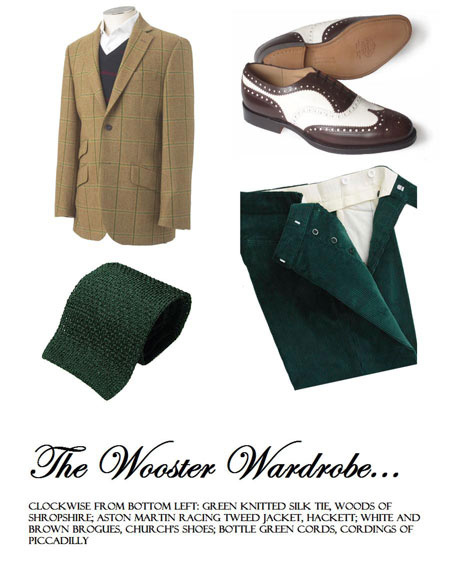 Interpretations of Bertie’s style have run the gamut from garishly eccentric to immaculate subtlety, but one constant is the glorious optimism of his character which shines through in his resplendent clothing. From checkered plus-fours, which Jeeves strongly objects to, with that famous and mighty ‘silent-disapproval’ look of his, to his beautifully tailored tails with matching buttonhole and patent kickers; Bertie is a character who delights in fashions, but never neglects style. Jeeves often has to inform his master of sartorial codes; ‘Gentlemen do not wear straw hats in the metropolis’, but, largely, Bertie’s style, superior to that of his Drone’s Club chums, is self-taught and much admired.

His eye for trends and individuality is marked frequently in the Wodehouse books; choosing a white-mess jacket for a summer dinner instead of the usual ‘bally black thing’. Often, this persistence with fads is a mere representation of one of the evils of Bertie’s idleness: boredom. However, Bertie has much to teach our cynical and graceless society about the honest goodness of being, if a little dim, a bally pleasant chap. Reading a few lines of Bertie’s exasperating trials with the opposite sex gives me a renewed goodwill to the world; it makes me want to don some sharp threads, a jaunty hat and a bow-tie and skip down to the park for a bracing walk and a reflection on the magnificent planet we live on.
If living like Bertie is a problem, then you could always adopt his bonhomie and a smidgeon of his wardrobe, so pick up your natty umbrella and take a walk in the world of Wodehouse.