It’s surprising what some people consider a waste of money. I recently had a heated discussion with a friend about flowers (yes, you read that correctly; ‘heated’, ‘about flowers’) as it had been suggested by him that they represented one of the most colossal wastes of cash and that the floral industry was one of the most widely accepted con tricks in the world. His argument was that the money could better be deployed on nourishment, clothing or other items of tangible value. The problem, he argued, is that cut flowers are a fancy of people who have run out of other things to purchase; they are only of use when they are looked at, and they die. Money should only be lavished, he argued, on things which receive sustained use; “Say, I’d buy a bespoke suit but…oh I don’t know…I wouldn’t buy a bespoke wedding suit. What’s the point? You use it once! It’s crazy.”

As I already possess morning dress perfectly adequate for the occasion, I simply commissioned a dove grey double-breasted waistcoat for myself, whereas my brother, father and father of the bride required the works; tailcoat, waistcoat and trousers. A fitting was conducted and a few weeks later, it was time for the first ‘basted’ fitting. 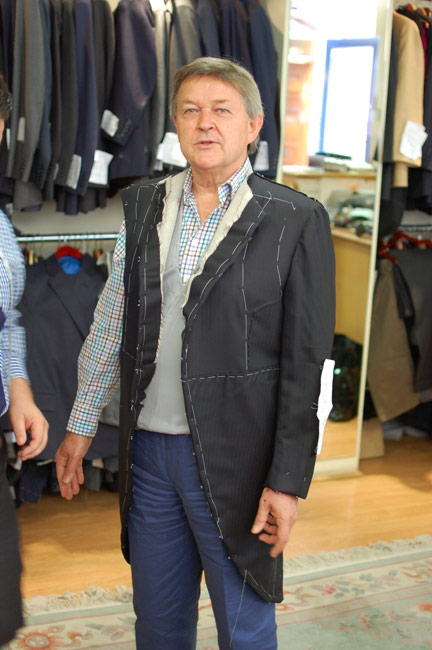 One of the common problems of hiring morning dress is fit. Basically, unless you are very lucky, it doesn’t. At all. A batch of tailcoats, trousers and waistcoats, leaving aside the inferiority in construction and material, are rarely delivered according to precise instructions; a friend told me at his wedding of his woe of hiring – when all the trousers were delivered in a Long rather than Regular as the renter muttered indifferently that they were “all we have at the moment.” In my mind, it is preposterous for the bride to be subjected to months of measurement, preening, planning, booking, dieting and ‘fairytale’ indulgence only to be met at the altar by what often appears to be an overgrown schoolboy who has raided several dressing up boxes. 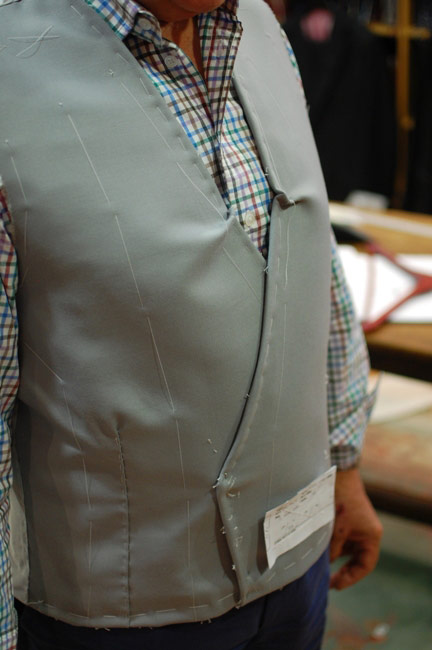 Aside from perfect fit, comfort and construction, bespoke also gives you an opportunity to really personalise your groom’s party. And I am not referring to twee ‘colour coordination’ with the bridesmaids or any other cliché; instead of doing as the others do, you can do as you would like to do. In this instance, instead of striped trousers, houndstooth was chosen and instead of a black tailcoat, a dark blue herringbone – a blue which matched the blue in the houndstooth perfectly. The grey double-breasted waistcoat was selected to have a deeper ‘V’ and ribbed edging around the lapels and hem of the tailcoat. More could have been done, but this was considered to be ‘sufficient.’ 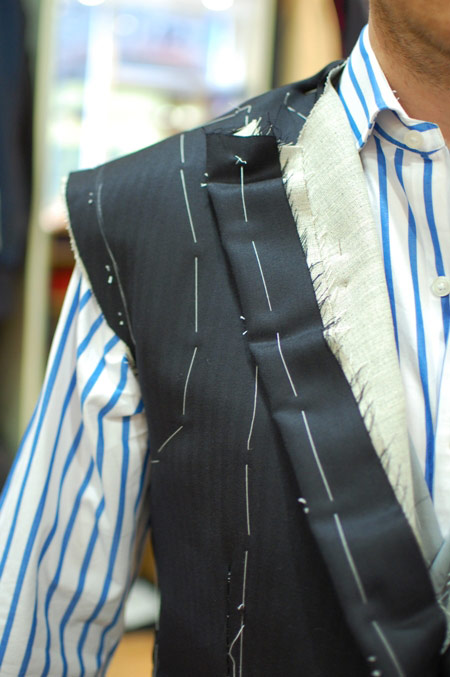 Importantly, these items are not merely an extravagance to be used ‘once.’ In that, they are quite unlike the bride’s wedding dress. There are other weddings to come, there is racing at Ascot and there is always the possibility, however remote, of being invited to formal function at the palace. Hiring is not only unsatisfactory, it is uneconomical.