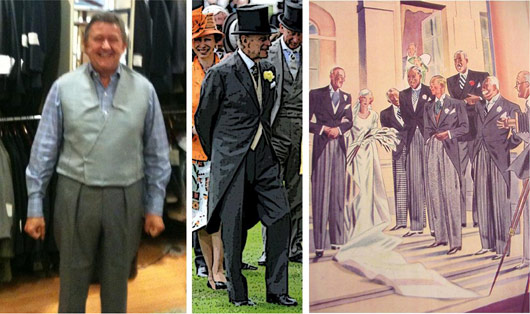 When a tailor is genuinely satisfied with his work, you can be sure of your own satisfaction. As Russell smoothed the deep blue herringbone tails of both my groom-to-be brother and my father, he uttered the same words; “I’m really pleased with that.” Though not surprised – for who could be surprised at their own handiwork? – Russell’s glee seemed to indicate that he was tickled by the result. There is evidently more to his job satisfaction than a client who pays on time.

This second fitting at Graham Browne began with the as yet unseen houndstooth trousers. I think trousers one of the most overlooked elements of morning dress, a fact which I find extremely disappointing from an aesthetic point of view but unfortunately unsurprising given the modern malady; a recent and rare visit to an Armani boutique resulted in my witnessing the appallingly unbalanced ‘tailoring’ service where all the client and tailor’s attention was given to the jacket. The trousers, worn on the hips and looking like a swag curtain in a Victorian dining room, concertina’d about the ankles, were apparently of no concern and were otherwise ignored.

In my view, the lower half of a morning dress ensemble, indeed any ensemble, can make or break the outfit. It is not simply a question of an overabundance of breaks; where the trousers are worn has a critical effect on the overall balance. Bespoke tailoring will not cure the ills on its own. When a man strides out from a dressing room in his tailored trousers, the tailor will never round on him, hoist the trousers upwards and deliver a sermon on the benefits of wearing the trousers on the waist. Everything else he cuts, the jacket and the waistcoat, is cut to accommodate the way in which the gentleman wears the trousers.

A bespoke tailor will always cover the top of the trousers with the waistcoat and therefore trousers worn lower tend to require a greater surface area of dove grey. This problem particularly affects gentlemen whose legs are shorter than, or simply equal to, their torso.

My brother is over six feet and, like me, has long legs in disproportion to his torso. He doesn’t wear his trousers particularly high but given the proportions of his body, he achieves the correct balance. My father is shorter than my brother and slightly shorter than me. However he is also evenly balanced in terms of torso/legs, unlike my brother and me, and this requires consideration.

Unfortunately, the pictures that were taken at the fitting have vanished into thin air, so you cannot see that though my father and brother were wearing their trousers at the same position, my brother’s leg length created the illusion that his waistcoat was cut shorter whereas my father’s waistcoat appeared to be longer. In fact, they were covering the same proportion of torso and trouser. The appearance of short legs is unattractive; men should strive that their legs appear longer as it gives an illusion of stature. When these photographs were perused, the problem was noted and was remedied (see picture above). My father’s trousers have been cut to be worn higher so that the waistcoat does not have to fall as low as it did. This will give a better illusion of leg length and, consequently, height.