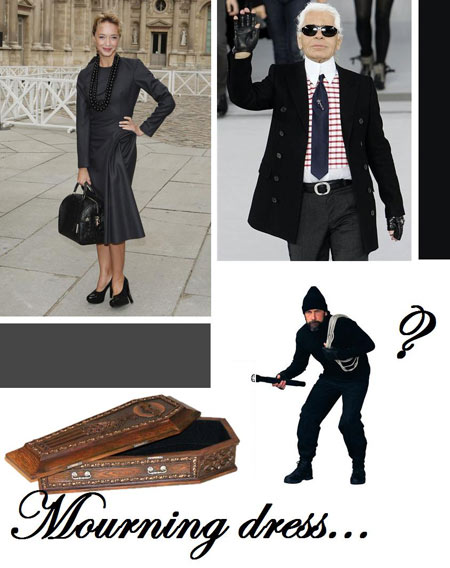 Although I am a man who would scarcely converse on an encounter made in a department store men’s room, a recent experience in a toilet at Selfridges made me reconsider. A brief moment, passing through the swing doors into the department store’s rather basic and disappointing facilities, provided the light bulb; I passed a gentleman who was dressed in black, quite literally, from head to foot. There was not a scrap of colour, even a square centimetre of white poking out from the layers of darkness; he was a cat burglar, a Navy seal, so utterly devoid of colour or variation that it was quite remarkable. This attempt went further than ‘tone on tone’; it was nigh on Gothic, and yet the gentleman in question seemed an unlikely member of that particular subculture. He was elderly, rather distinguished looking. I was a little shocked.

The entirely black look is to some, including a number of my friends, a rather lazy attempt at smartness which actually attracts unwanted attention. One particular acquaintance scoffs and dismisses it as a “cop out”; something safe and lacking in personality that masquerades as formality, albeit rather severe formality. When I wear black, I often throw in a little grey and white; a practice which, itself, is rather safe and unchallenging, but I have never been sufficiently persuaded by the modernist trend towards black to pile the colour together, in any number of layers, and present it as an acceptable ensemble. Women have no problems in this matter; quite happily they will pair a black blouse with a black cardigan, skirt and overcoat – sometimes with rather pleasing results. Men who attempt the same colour layering with black only end up looking sinister or woefully unimaginative: “Who died?” someone is likely to jibe.

The solution for men who prefer to keep things simple – and very, very dark – is to learn how to break up the blackness with tones of grey and white. Different grades of grey, matched with black, add depth to ensembles. One’s overall look is altogether more composed and less slapdash; the pieces react strongly. The necklace on the lady in the picture would be lost on a black dress; the slate grey is effective, without offering too much of a contrast. White shirts help break up the monotony of black but beware that black suits with white shirts are frighteningly common and overdone; try to mix and match grey, white and black to avoid the ‘poppy’ clichés. Texture is also very important in outfits that offer little in colour variation; knitted waistcoats look fantastic next to fine suit cloths and, if you insist on wearing a black tie, add a grey vest – to minimise the ‘mourning’ connotations.