Timeless Appeal of Black and White 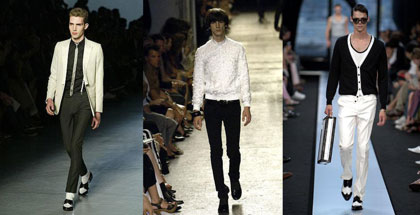 Black and white is so simple. One is the very apex of colour, the other the complete absence of colour. The basic art of sartorial monochrome was certainly one of the most influential fashion movements of the 20th century, and it seems like designers and the public can’t get enough of the penguin palette.

When Coco Chanel dragged the colour black out of the coffin, off of the hunched backs of weeping widows and onto the spruce torsos of gamine girls, black and white was suddenly, in one sweeping decade, one of the chicest combinations the fashion world had ever seen.

Even today, men and women fawn over ‘new’ collections of contemporary and classic tailoring in the midnight choice of black and white. There is a mystifying glamour to its minimalism; when now, with mass production of clothing dyes, a man can have clothing in any colour on the planet at the swipe of a credit card, many choose to remain faithful to blanc et noir.

Modern monochrome is seen everywhere from runways in New York, Milan and Paris to the side streets of Buenos Aires, Melbourne and Casablanca. It is, for many people I have spoken to, the safest choice of evening outfit for both men and women, and many male friends swear by a simple black suit with a white shirt for a first date.

However, isn’t all this ubiquity a little degrading? The exclusivity that Coco Chanel sought to create with this dangerous look has certainly faded, and if it’s seen everywhere and worn by everyone, does it behove a man of individual style to fall in with the crowd? Of course not. The very fact that a man of individual style is at the helm of choosing and controlling an outfit which has been used, and very much abused, by a considerable number of the population should mean that he will exert his own taste and particular panache on achieving a very personal look.

How should he start? Well here are some basic recommendations for black and white looks. 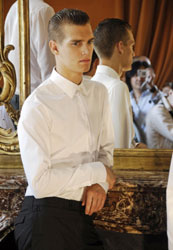 It is extremely unlikely that any man is not in possession of a white shirt; for me, they are indispensable for use with ties, black waistcoats, jeans, dark and light blazers – the list is almost endless. They are the canvas on which one can daub one’s personality. It is my opinion that a man should possess a good many white shirts. Not merely two or three, but five or six, and they should all be of different styles. A typical fashion shirt of the moment is a slim-fitting white shirt with a small non-cutaway collar. 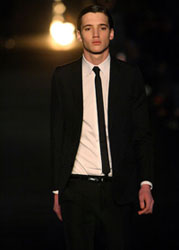 For very fashion forward men, this is a fantastic choice for wearing with slim black ties, casual black jackets, skinny jeans and winkle pickers. It’s quite a hackneyed look now, but it is quite dramatic and for its lack of freshness it still cuts a dash. 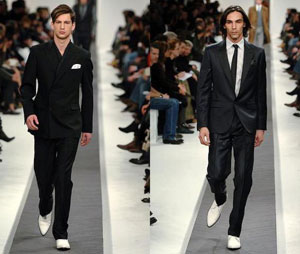 White shirts with larger collars, starched to stiff perfection look fantastic worn in the spring/summer with black jackets and denim. White looks great with a tan, and if it is clean has the magic quality of adding crispness to the wearer’s look.

White is quite a patrician colour for shirts and wearing a white shirt with a black suit, without a tie looks effortlessly classic. Head to foot black complemented by a shock of white is not actually that modern a look; men have been wearing such monochrome styles since the 18th century, but its fierceness keeps it fresh and stylish. Keep the black suits slim and the white shirts subtle and crisp. Collars should be strong and should not crumple the placket when buttons are undone.