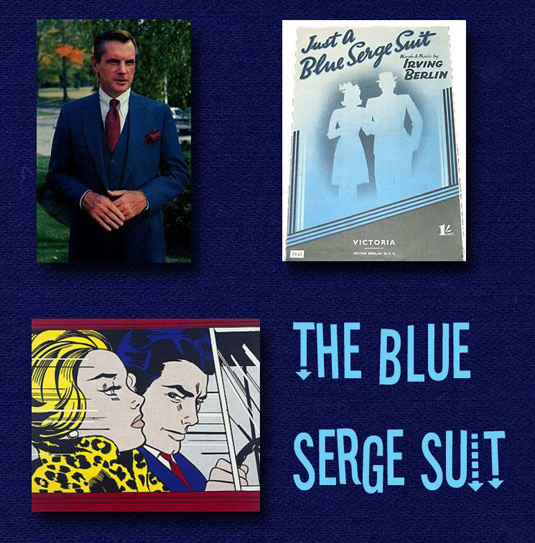 I know of Cab Calloway for the marvellous “Minnie the Moocher”, his towering contribution to early 20th century music that combined scat, coded social commentary and call-and-response delivered in an obese and luxurious jive jazz style. It is primarily for this number that he is remembered but he was also responsible for several other gems before, during and after his famous residency at Harlem’s Cotton Club where Minnie was premiered in the early 1930s.

One of the tunes that I became aware of was the curious “Blue Serge Suit” which pokes fun at a hopelessly out of fashion ‘square’ who dislikes boogie-woogie:

“You won’t believe this jack

All his clothes date back

“Strictly calm and he’s off the cob

Wears a pocket watch with a pearly fob

He’d be just as sharp in a sack

As in the blue serge suit with the belt in the back.”

The blue serge suit was something I always associated with Hitchcock films from the early days of Technicolor; chiselled and tanned leading men, oversaturated scenery, red lipstick, pillbox hats, white gloves and a mid-blue serge suit. The material, wool serge, is principally used as a military dress cloth, and is an unpopular material these days. It lacks the refinement demanded by many of today’s bespoke customers, lacks depth of tone and is famous for its tendency to ‘shine’ after extended use and ironing.

“Did anyone ever tell you …eyes—your eyes, they shine like the pants of a blue serge suit.”

Though much mocked, blue serge was hugely popular during the post-war years and it remained an honest sartorial dream for GIs returning home from war torn Europe and the South Pacific. After the horrors of conflict, the simplest and most basic of needs and pleasures became principles of perfection and the blue serge suit was idealised alongside calico as being ‘good enough’ for all.

“Just a blue serge suit and a bright new necktie,

A room of his own with a door,

Just a bed with sheets and a home-cooked dinner –

That’s what he’s been fighting for.”

“Seen most every kinda gal

Every kind of gown

But who makes my heart sing

My little gal in calico.”

Johnny Mercer, A Gal in Calico

Serge, though almost never used in ready-to-wear suiting, is still found in most tailors’ swatch books. To the modern eye it might appear rather flat, and a little cheap, but it has an everyman honesty which mohair and even flannel lacks.

The classic blue serge is not navy but mid-blue. Reiss did a pretty good interpretation of the cut and colour, though not in serge, a few years ago. Combine with a white shirt, burgundy tie and white linen fold to achieve the classic Lichstensteinian effect.