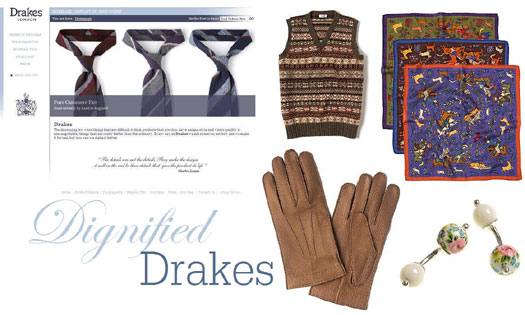 It is always unnerving when you encounter a brand that sounds plausibly antiquated but is in fact still in its first generation. I once wrote of Aspinal of London, a company that borrowed seven of the eight letters of a famous Mayfair gambling club, perhaps in a bid to sound credibly ‘upper-crust’; a remarkably young company, considering the heritage design and appeal of its products. I was equally surprised to learn that Drakes of London, a brand that could easily have been around since the time of Queen Anne, was actually the same vintage as my parents’ marriage.

Unlike Aspinal, Drakes is not a name plucked from the top shelf of ‘England’s Most English Appellations.’ It happens to be, rather simply, the surname of the founder, Michael Drake. I hadn’t heard anything of Drakes before buzz in the style forums, and in various glossy magazines, focused on their apparently excellent online store. Famous for their ties, scarves and silk handkerchiefs, I needed little encouragement to pay a visit.

Aesthetically, Drakes is resolutely conservative. Not that this is any bad thing. I didn’t see a single tie in their collection that I wouldn’t like to own. The designs are in perfect taste, the colouring is subtle; paisleys, polka dots, stripes, foulards and Prince of Wales checks. Approving of the entire collection of neckwear, including the wonderful tartan bow ties, I moved on to scarves.

Drakes scarves ought to be their flagship items for it was the early success of their scarf sales that led the company to explore the manufacture of other gentlemen’s accessories. I liked the vast majority of the scarf stock on offer, although there were one or two that I considered a little ‘trendy’ and passé – the sort of thing you might see in a Boden catalogue.

The handkerchiefs, casually labelled ‘Pocket Hanks’ on the website (not the Forrest Gump iPhone app), are truly spectacular. The Moghul Knights and Bird of Paradise designs, “inspired by paintings from the Moghul period in design and colour” are a gorgeous example of tasteful pattern, colour and texture; 70% silk, 30% wool, they are pure pocket tapestry.

I was also considerably impressed with both the aesthetics and apparent quality of the other items in Drakes online store; beautiful cashmere shawl collar cardigans, Fair Isle sleeveless jumpers, a rainbow of socks, delicate little cuff links. Nearly every item was to my particular taste.

There was, however, one thing which irked me; a nagging irritation that dogged the pleasant tour I was making. Drakes is still slightly too expensive. I made an examination of some Drakes items at Dover Street Market and, like everything else at Dover Street Market, I considered the items overpriced.

I admire the brand for not selling out. I admire the brand for manufacturing the items in the British Isles and I am in no doubt that the items are of a rare quality, but some of the items offered, such as the £125 cotton shirt, the £125 wool scarf and even some of the £85 wool ties, are rather unrealistic in terms of price. I can also detect that Drakes realises this; “Learn why our shirts are so special”, “entirely made by hand in England”, “woven in the Scottish Borders”, “hand rolled”, “hand printed”, and various other details of manufacture that bring a tear to the eyes of every nostalgic patriot, all smack of a company trying to justify itself.

Having said that, my perspective is that of a man who has matured in the era of unsustainable disposable fashion. Drakes naked statement, which stands proud as you like against the winds of cheaply produced, disposable, ethically dubious wares, says it all; “Every day at Drakes we ask ourselves not how can we make it for less, but how can we make it better.”