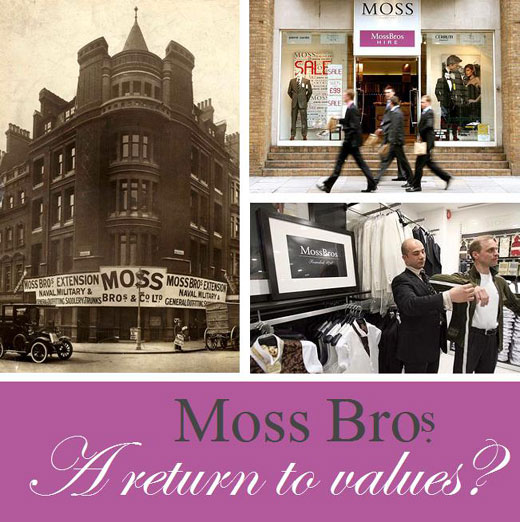 “Sell only the best stuff, give only the best service.” These were the words of Moses Moses, the founder of Moss Bros, who opened a second hand clothing store in 1851 amongst the cabbage leaves and trodden petals of Covent Garden market. Such a store is anathema to the 21st century’s comprehension of ‘olde worlde’ retailing for when we imagine a past this distant, we imagine only the romantic, novelized circumstances of those at the top and those at the bottom – silks for the former, rags for the latter. The idea that there was a vast and tedious sea of people who were above squalor but beneath bespoke tailoring is rarely considered, and yet these people offered the custom on which countless brands have been built. One of Moses cleverest ideas was the purchase of spare suits from Savile Row which he then sold on in his shop – offering the very best in quality and construction to those that could not ordinarily afford it.

As bespoke tailoring increased in price, demand for alternatives increased and half a century after their father had begun the trade, Arthur and George Moss (anglicised due to the 19th century’s antipathy to Judaism) were employing skilled independent tailors and offering hand-finished ready to wear that combined the knowledge and art of Savile Row with the increasing efficiency of the industrial age. Considering the recent renaissance of tailoring, it seems strange that Moss Bros ever relinquished this combination. From the 1920s, the brothers Moss decided to focus on ready to wear and clothing hire; the company expanded, eventually acquiring Blazer, Dormie and Cecil Gee. Franchise dalliances with Hugo Boss and Canali moved the business further away from its roots as a go-to place for those to whom Savile Row was but a distant dream – the ‘rollercoaster’ 20th century certainly didn’t help but one cannot help but conclude that some wrongs were done which were never righted.

Now, it seems that Moss Bros are going to attempt their own renaissance; recent press reports have heralded their attempt to be a “cut above rivals” by “bringing Savile Row-style tailoring to the high street.” This will be seen as either a result of sensible soul-searching or simply another ‘me too’ reactionary venture like their disastrous ‘Code.’ However, whereas Code was simply a complete misfire – an attempt to cash-in on a trend towards the casual by discarding the immense goodwill that the Moss Bros name carried – this is a move that acknowledges, albeit superficially, the heritage of the group. Although it doesn’t have the Dickensian romance, or the dusty ‘Made in England’ pedigree – the suits will apparently be made in China for £250-£350 and ready in four weeks – their mission should warm the hearts of those who remember Moss Bros as more than an overstocked one-time wedding shop for grooms who couldn’t care less.

The Moss Bros name was far finer than it is now. The awful shopping experience now is a result of messy compromises, ill-judged acquisitions and avaricious expansion. The Covent Garden store is indeed lovely, despite being filled with poor quality product, but the cheap and narrow high street stores up and down the country denigrate the brand to the point of ridicule. Walking into Moss Bros, even amongst my least sartorially aware friends, provokes questions of ‘What the hell do you want in there?’ In my opinion a name rebrand (to Moss Brothers – ‘Bros’ is spoken in rhyme with Moss to unfortunate effect), shop floor presentation and inventory examination are most needed. Admittedly, Moss Bros has never sought to be a grand name – and nor should it now – but they have a chance to shine, legitimately, as a high street brand representing the possibilities of elegance on a budget.