“Look at that” I exclaimed “what beautiful luggage!” I was walking with a friend past Claridge’s hotel, where a few smart black cars had just regurgitated, with the help of liveried doormen, a mountain of bags, suitcases and suit carriers onto the pavement at the entrance. The luggage was a mixture of mid-blue, red, khaki and army green with brown and tan leather straps, covered in peeling stickers and travel labels, and there it was; sat at the little-changed entrance to an Art Deco palace. It was a moment lost in time.

My friend was somewhat nonplussed. Did he not appreciate beautiful luggage? “I don’t like that sort of stuff” he mumbled, staring at his shoes “makes you look like a colonial.” What then, would be his luggage of choice “I’ve always preferred those German, aluminium cases” he said “Really sleek. James Bond luggage.”

However, knowing the aesthetics of the famous Rimowa brand, I found it difficult to disagree with him. 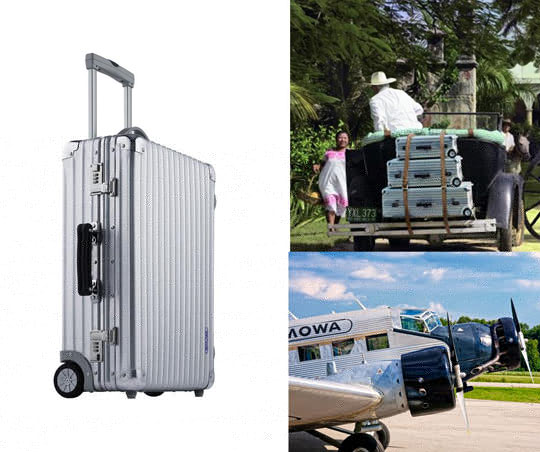 Though the original company was established in 1898, Rimowa’s signature aluminium grooved suitcases did not appear until 1937. In fact, the decision to use this unconventional material in luggage manufacture was the result not of ingenuity but of an unfortunate accident and improvisation. The story goes that sometime in the 1930s, Richard Morszeck and his father Paul’s luggage factory in Cologne suffered a conflagration; all the materials that had been used to make classical luggage (wooden construction) were lost. All that remained was aluminium.

Though originally a classic 19th century luggage company, Rimowa is very much the luggage marque of the mid-20th century. The iconic aluminium cases are of the aviation age; Globe Trotter cases, despite their lightness, belong to the age of the ocean liner. Touching a grooved Rimowa case is like touching the cold fuselage of a 1940s aircraft. Unsurprising, considering that they are made from aircraft aluminium, the same material that clad the famous Junkers planes.

Aesthetically, they seem to possess both the romance of early flight and the minimalist cool of modern travel. They also look terribly serious, industrial and almost scientific, like they contain things of consequence, things worth protecting. Whether this is a good or bad thing depends on how paranoid you are about luggage-handling theft.

Since the early days of flight when Rimowa’s light and in-theme luggage captured the imagination of enthusiastic air pioneers, Rimowa has moved on. Over two thirds of its global sales come from their newer, lighter and stronger polycarbonate cases (the Salsa, Bolero and Limbo ranges). Though of an improved specification and extraordinarily popular, they are not as aesthetically appealing as the aluminium cases which come in three ranges; Topas, Silver Integral and Classic Flight. 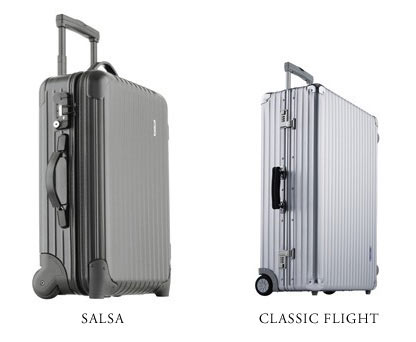 The Silver Integral is an aluminium case with a modern edge. The Topas was first introduced in the 1950s, and therefore has retro appeal, but it isn’t as romantic as the Classic Flight which betrays none of the improvements that have been made to the Topas and instead boasts delightful details like polished corners and leather handles. If anything was to rival my admiration for the likes of Globe Trotter and Alstermo Bruk, I think I have found it.