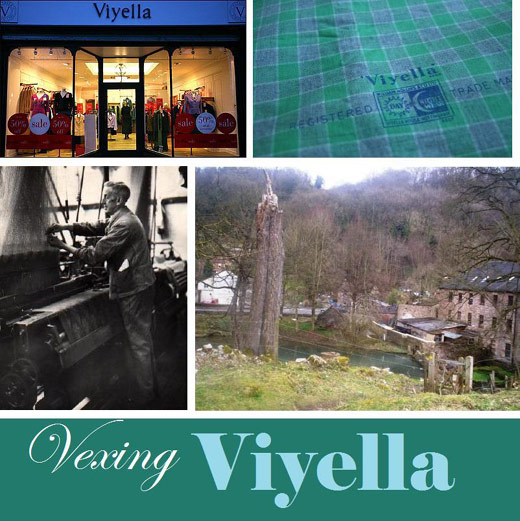 In a little wooded valley in Derbyshire, a neglected building looms over a pond. It’s regimented spacing of small windows, uneventful façade and perfunctory annexes convey the unremarkable; another forgotten mill.

However this old mill is located in one of the most famous valleys of the county, the Via Gellia. A somewhat grandiloquent name for so ordinary a valley, this Latinesque pomposity was nevertheless an inspiration for the name of one of fashion’s most important fabrics and one of it’s latest victims; Viyella.

In the late 19th century, William Hollins & Company created of a blend of cotton and merino wool. The twill weave cotton/wool combination was more resistant to shrinkage than the pure wool alternative. It was lighter than wool, yet somehow as warm and more practical. It was an instant hit and soon after it’s creation the “first branded fabric in the world,” ‘Viyella’ was being shipped around the world.

The fabric’s popularity waxed and waned throughout the 20th century but generally followed a downward trend as the years wore on. Increased interest in the fabric in the 1980s, ignited by demand from brands such as Laura Ashley, led to a mini-Renaissance. However this peak was short lived; the newly built factory in Lancashire was to be demolished less than twenty years later. A little over one hundred years after it’s creation, the Viyella fabric is no longer offered for sale. All that remains is the clothing brand which was built on it’s success.

Sadly, Viyella International is no longer an independent concern. What was once one of the largest textile businesses in the UK was humbled by a series of unremarkable changes of ownership. Brand Viyella was first sold in 2003 as part of the holding company’s restructuring to an entrepreneur as part of a measly £1 deal. It was sold on to a venture capitalist and went into administration six years later when it was ‘rescued’ by the not-exactly-healthy Austin Reed.

A little over a year later, Viyella under Austin Reed’s stewardship is offering an appropriate glimpse of a yesterday world of substantial fabrics, solid craftsmanship and traditional British aesthetics. Tartan ties, tweed jackets, coloured socks accented by the head of a stag (Viyella’s logo), the collection is certainly of heritage style but what it offers in aesthetic it fails in range and marketing. These brands-within-a-brand rarely work and as it comes to the middle of the summer sale, the Viyella racks on Regent Street are still creaking with stock.

Unlike successful retailers of crusty British attire Hackett, Viyella-from-Austin Reed is half done; Hackett woos you with a more complete range, style inspiration points from romantic imagery, classic film and rose-tinted visions of Edwardian England. It grabs you and holds you. You want to be a part of it; it encapsulates an entire lifestyle.

No one knows who the Viyella man is. He has a strong history, stronger than the fledgling Hackett, but he obscures this enviable provenance within a store known more for it’s increasing mediocrity. The fabric is no longer relevant and no longer wanted but the brand needs to be trumpeted; this is our history, this was our mill, we sold fabric to the entire English speaking world. Doubters say that Viyella was merely a mill. Really? Well then, Gucci was merely a saddler.