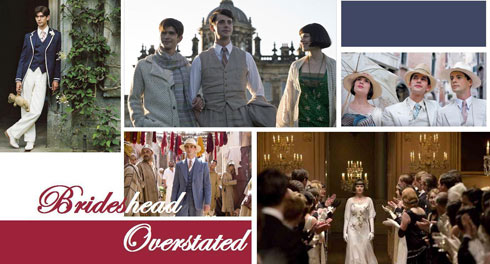 There was always something a little fishy about the choice of Castle Howard as the setting, once again, for Brideshead; the seat of the aristocratic family, the subject of Evelyn Waugh’s Brideshead Revisited. That the film makers of the feature length version simply had to choose this famous baroque pile in Yorkshire for the family home of the Marchmains, to match the 1981 miniseries, made me a little less optimistic about its release. It revealed a lot about the mindset of the adaptors. They were clearly wary of the power and enduring appeal of the Granada masterpiece and yet, instead of choosing to source their own Brideshead, to craft their own mystique, they lazily borrowed from earlier artwork. I had the horrible feeling that I was entering a theatre to watch, not a story and characters I had loved and admired, but a curiously unnecessary revalidation of the thought that one visit to Brideshead was quite sufficient. Were it not for the costumes, I might not have entered or endured.

One of the most fabulous treats of a period drama, no matter how it is massacred by the screenwriters, the juvenility of the green actors or even an overbearing score, is that you are certain to be delighted by onscreen beauty in setting, architecture and above all costume. For the recent film The Duchess, the actors did not have to compete with each other, the director or the composer for the best reviews; they had to compete with the costumes and the sets. Our love for period film has turned us into visual gluttons who love to see the fashions and worlds of yesteryear as an on-command pageant in front of our eyes. This has ensured that accuracy in costume, and budget revision, has been one of the key considerations of period filmmaking. You can even hear them before pen is put to paper on script: “Well, we don’t have a story yet but Steven, this is Victorian London! It’s going to look fabulous!”

The danger with this is that sometimes, budget accords too much time and effort to costume. In a bid to win back the cost of production, the wardrobe departments sometimes veer into the fantastical and improbable; you see costumes and not characters. In Brideshead Revisited, this happened more than once. Some of the costume lacked period accuracy, as did much of the film – one boo-boo was to feature a summertime visit to Venice offering the pleasure of Carnivale which actually takes place far earlier in the year. That mistake summed up the intention of the filmmakers (or financiers – what you will); this was a rearrangement of the story, of the characters and even the cities in which they frolicked. Accuracy in costume would be hardly noticed. There were strange 1950s neckties and 1940s lapels, out of place in pre-war Britain, suspiciously 60s Missoni style scarves and some very modern cuts of suit that paid no heed to the lines or construction of 30’s tailoring. It was attractive, and extravagant but one was frequently wondering; “Would they have worn that?”

Having said that, there were some wonderful ensembles that cleverly displayed the differences between middle class Charles Ryder and aristocratic Lord Sebastian Flyte; their first ‘encounter’, when Charles peered over a bridge to watch Lord Sebastian lolling in a punt as Anthony Blanche entertained those surrounding with his recitation, had Sebastian dressed in blue Henley jacket and waistcoat, white trousers and white shoes. The very picture of patrician progeny. Charles was dressed, due more to budget and social position than taste, in a more bland fashion. His artistic soul appreciated the Decadents but his middle-class awareness prevented him from following them too closely; in clothing, as in life, there was always something holding him back from a world he had dared to suppose he could be a part of.