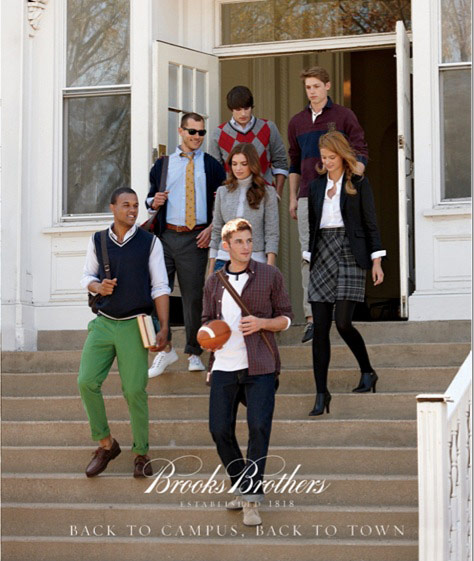 The other day I was flipping through the mail, and was shocked when I stumbled upon the new Brooks Brothers catalog for Fall. It wasn’t getting the catalog that shocked me (I get more clothing-related mail than any sane human being should), but rather what I found on the cover and inside. Everything looks so….modern.

The best thing about this revelation was when I realized that they had essentially changed nothing. Lets take a look at the cover image above – argyle sweater with a wide v-neck, dark rugby shirt, navy cardigan and blue OCBD with a club tie, and sweatervest paired with chunky-soled mocs. It might as well be a page from Take Ivy, or, and here’s the kicker for me, a Brooks Brothers catalog from 40 years ago.

I’ll admit that at first glance I got worried that things were turning into RL Rugby, but when you open the pages, ties are still carrying herds of sheep rather than a mausoleum and the pastime of choice is chess, not spin the bottle. It probably didn’t help that some of the models on the cover model for Rugby as well, but the similarities really do stop there.

By updating their cuts, making them slim but not skinny, Brooks Brothers has taken the basic wardrobe staples of the American man, cozy sweaters, casual trousers, and the ever-wonderful OCBD and made them just modern enough that you notice. Now I’m no fashion cognoscenti, but if you ask me, these clothes seems very “Fall 2010.” Unlike some other on-trend offerings though, to continue my clairvoyant charade, I think these will continue to look very “Fall 2011,” “Fall 2012,” and so on, for years to come. And by the time they look fuddy-duddy, you’ll have sufficiently shredded and stained everything, making you the real-vintage envy of every fashionista out there.