Picking out a good pair of shoes is something that I’ve wanted to do for a while. That’s not to say that my current crop of dress shoes is terrible – I’ve got a small but solid collection that served me very well for the past few years – but I’ve long fancied a pair of solid, Northampton-made shoes that both look the part and can stand up to the elements.

After long periods of lurking and reading through old StyleForum threads I narrowed down my search to three manufacturers who produce a reasonable range of quality shoes at around the £300/$300 mark: Church’s, Crockett & Jones and Tricker’s.

I started by looking at Church’s, whose mid-market collections seem to be, at full price at least, the most expensive of the three, though it’s not hard to find a pair on sale for around £300 from any number of retailers.

A common, largely unsubstantiated, view that I came across in my travails is that the quality of Church’s shoes has gone down in recent years, especially since they were bought by Italian fashion giant Prada. This opinion seems more due to the fact that they now have a fairly large, modern(ish) production line, and are therefore not quite as “handmade” as some of the other Northampton-based manufacturers, than for any real decline in standards.

From what I can gather, most long-term Church’s wearers continue to be very happy with the quality of their shoes, especially in terms of fit and comfort. A number of people said that they weren’t particularly hard wearing, but as they gave no indication of the model of shoe, nor the kind of activities they were doing while wearing them, I could neither confirm nor deny these claims (and let’s not forget that James Bond wears Church’s).

Crockett & Jones’s reputation has soared in recent years. The prevailing view seems to be that, in terms of quality of leather, design and value for money, these luxury shoes are hard to beat. Excepting their country range, C&J’s tend to be sleeker than Church’s or Tricker’s, which makes them a good match for Italian-made suits.

Their general narrowness may be a concern for the wide-footed (C&J’s standard fitting is E, Church’s is F), but it really depends on the type of last used during construction (a StyleForum search for “’Crockett and Jones’ + lasts” will provide you with all the info you’ll need on the subject). As always, try on a number of pairs before you buy to avoid disappointment.

Unfortunately for consumers, Crockett & Jones’s current surge in popularity and relatively small production capacity has resulted in a backlog of orders. This might be bad for those wishing to get their hands on a pair ASAP, but it is a plus in other ways: they don’t have the kind of massive financial backing that will allow them to increase production without sacrificing quality and, thankfully for us, have decided that the latter is more important.

Finally we have Tricker’s, who are most famous for their range of hard-wearing, thick-soled country boots and shoes. The boots, especially, come in a dazzling array of limited styles and colours and are immensely popular with the Harajuku kids here in Tokyo.

Unfortunately, the general clamour for Tricker’s heavily-brogued boots seems to have blinded many to their two very good dress shoe collections: Jermyn Street and 1829. In terms of quality and value for money, these lines are favourably compared to Crockett & Jones’s. Most of their leather-soled shoes have channel stitching, and some even use oak-tanned leather, which is something that you’re unlikely to find on full-price shoes costing £300. 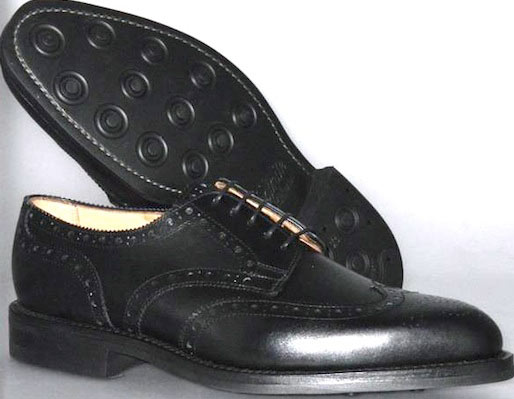 In the end I decided on a pair of black Crockett & Jones’s Swanseas with Dainite soles (I plan on doing a lot of walking in these babies, come rain or shine, so rubber soles was a must). As is my terrible luck, the very last pair in my size sold out about a day before I placed my order, and with C&J’s current production backlog it would be at least several months before I could get my hands on a pair.

Needing some shoes before fall and winter hit, I decided not to wait and found a couple of online retailers who had a plentiful stock of Tricker’s Newburys (pictured above) for almost exactly the same price as the Swanseas. I’d already tested out a pair of Tricker’s that used the same last and felt confident enough to buy them “untried”. As for a pair of Crockett & Jones’s, well, maybe next year…