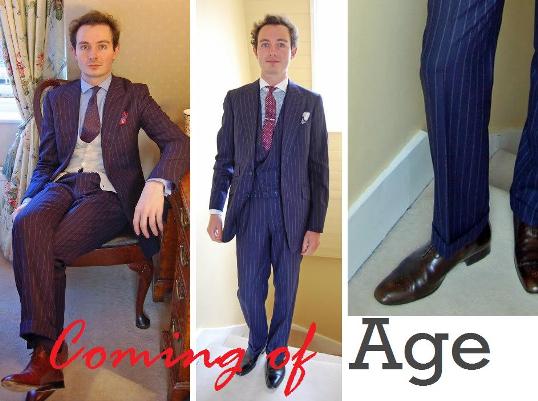 Last year I had a suit made by Cad & The Dandy Bespoke. A blue chalk stripe English wool flannel, it was my first full bespoke venture having already sampled their earlier, and still excellent, made-to-measure service.

James Sleater, co-founder of Cad & The Dandy, was very keen for me to begin wearing it on completion, as was I; unfortunately, London was in the middle of a summer heatwave and the idea of wearing a wool suit in a sweaty city was unconscionable. Aside from trying it on in the bedroom a few times, the suit remained untouched until the autumn.

Having now worn it 30-odd times, I revisited the wisdom of James and head tailor John; though their view was that an immediate reaction and review was essential, it’s as important, if not more so, how I feel about it in time.

As the months passed, I became conscious of how the suit began to be deployed with increasing frequency; for a man who craves and respects variety above all things, my tendency to wear it twice within a week was both worrying and telling. Much like my childhood enthusiasm for ‘bangers n’ mash Tuesdays’, I began to look forward to ‘Blue Chalk stripe day’ with relish.

What seemed so deliciously absurd was that something so elegant could be the most comfortable thing I have ever worn. In one instance, so comfortable and untroubled was I that I felt decidedly slouchy; a social occasion at one of the Houses of Parliament demanded the finest threads and yet I wandered around with apparent casualness as if dressed in pyjamas and a dressing gown. Only the pictures from the evening confirmed that I was, in fact, in my blue flannel chalk stripe.

Comfort and elegance are rare sartorial companions; it is no wonder that bespoke suiting is so prized and celebrated. However, it is more than a mere physical sensation. A colleague at work recently told me that the most important asset of his few bespoke suits was that he could “throw one of them on in the dark” and not have to “worry about the way I look.” Considering this peace of mind alone, he believes he has achieved a return on his investment; my suit from Cad & The Dandy, coming up to a year old, keeps on paying back.