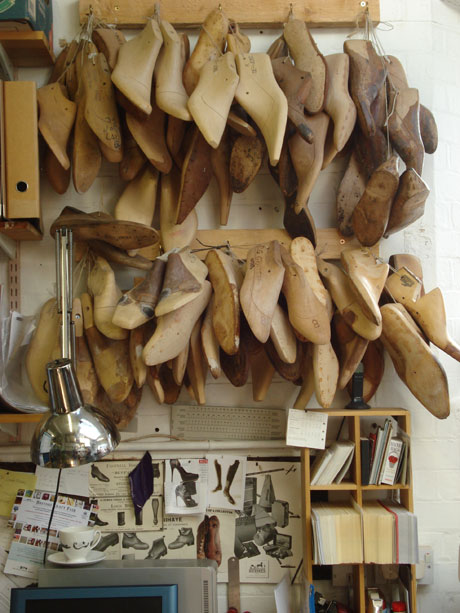 You wouldn’t necessarily pick a former English teacher and a former PR executive both with a love of Radio 4 as revolutionaries, but that is the impression I got of Deborah Carré and James Ducker.

Perhaps it would be better to call them small ‘s’ subversives. Other than an obvious dedication to the artistry and craft of English shoe making in its purist form, nothing about Deborah and James is what you’d expect from bespoke shoemakers, and to my mind that is a positive.

To begin with, Carréducker shoes is based in the Cockpit Arts studios in London’s Holborn, run by the local authority. Not a flash store in an off-Bond St. Arcade, Cockpit is a Creative Arts Incubator and a hive of artistic and creative activity. Carréducker shares its studio space with a jeweller and a musical instrument maker. The first thing that struck me was the wonderful smell of wood, glue and smelted metal, which if they could bottle would put an end to the need for chemical sleeping aids. You soon notice the wooden lasts hanging on the walls and then the small knee high table and stools on which Deborah and James work. Relaxing and down to earth you really get a sense of collaboration between yourself and the people creating your shoes. I imagine this engenders an appealing bond between customer and patron and makes it especially easy to communicate what you want. 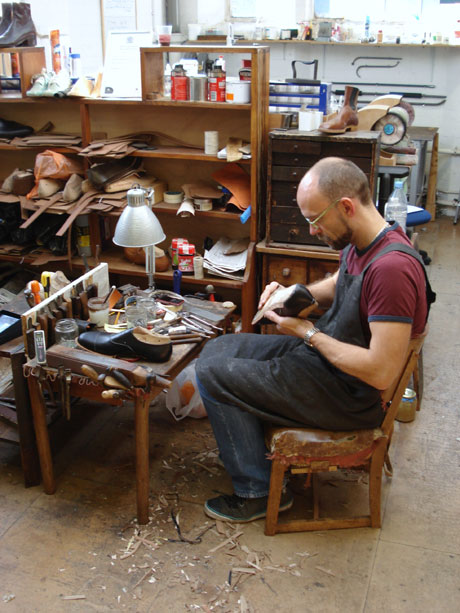 Not that talking to Deborah and James would be difficult. Patient, friendly and down to earth, we had never met before but chatted for some hours over what they did; and they showed the greatest patience in the face of my ignorance on the matter of bespoke shoemaking. Any type of bespoke clothing represents a considerable investment and no one likes to feel intimidated or at the mercy of the people you’re asking for help.

But then I suspect this easy approach is in part down to Deborah and James’ backgrounds. Neither has what you’d think of as a traditional apprenticeship. James started his career as an English teacher in Spain. Having done a few evening classes at the guild of shoemakers in Barcelona, he met a shoemaker who allowed him to use his workshop to make shoes for himself and friends. It was this knowledge base that made him appealing to John Lobb who took him on and sent him on an apprenticeship. Deborah by contrast initially went into Public Relations, but caught the shoe making bug undertaking her degree in fashion. She decided to pursue her interest first via night classes at Cordweiners, and then, as a Quest Scholar, on the same apprenticeship as James. It was here that they met, and having remained friends after their training later decided to establish Carréducker shoes.

As to the shoes themselves, they certainly have the feel of an English bespoke shoe. But you only have to look at the mix of textures, colour and the use of shape to see there is something original and refreshing about Carréducker that sets them apart in my view.

Deborah describes shoemaking as “the mixing of hand and head. So much of bespoke shoe making is about problem solving. With women’s footwear anything is possible. There aren’t as many limitations and I liked the idea of working within quite defined rules, and pushing those rules just a little bit –not too far just a little bit”. It’s a philosophy James echoes; “Men’s styles evolve very slowly, which is part of what we like about it, it means you can speed up that evolution just slightly and introduce changes and see how it goes from there. For example, the lizard skin boots, we’ve introduced the piping in another colour. It’s just a subtle detail but it alters the shoe markedly. Those are the kind of things we try and do”.

They‘re certainly not afraid to experiment, and this makes them rather an exciting brand. It certainly contributed to some recent successes. Not only is their trunk show hosted by renowned NY footwear emporium Leffot, but last year they were awarded Selvedge Magazine’s Excellence in Textiles award.

Bespoke service aside, Carréducker offer a range of limited edition off the shelf shoes in two designs know as the half-cut and Extreme Brogue. Made in batches of 100 in each colourway they’re manufactured in Northampton to their own specifications. A little more affordable than the bespoke service they none the less give an insight into the mix of traditional craft and modern design that is, to my mind, the hall mark of Carréducker. 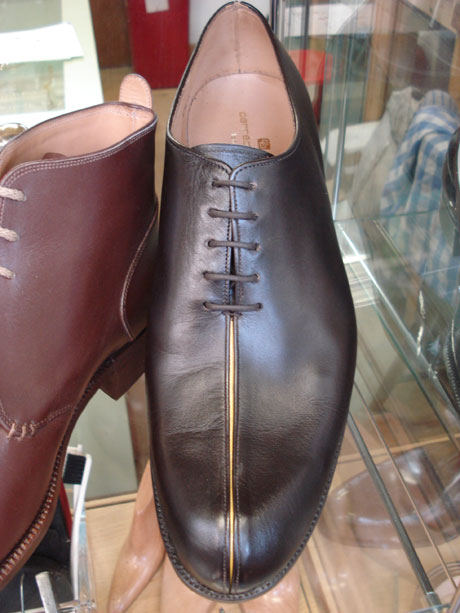 I’ll confess that at this stage in my life bespoke shoes are only an aspiration, but as soon as the funds allow I’ll be making an appointment with Deborah and James.