Catching Up With Old Friends and Making New Ones 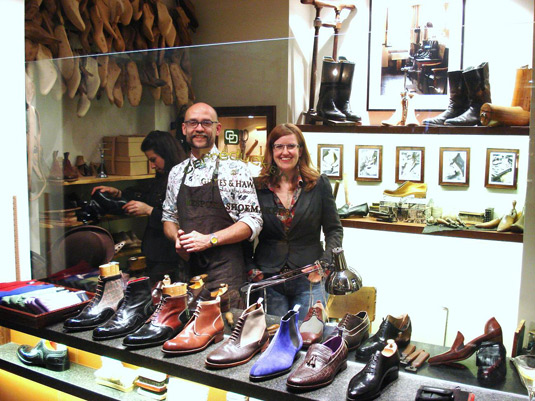 Aside from meeting Mr Andrew Brett and Archivist Peter Tilley on my recent visit to Gieves & Hawkes I also caught up with Deborah Carré and James Ducker.

James and Deborah (a regular reader of Mensflair) together form Carréducker Shoes and are old friends of Mensflair. Several MF columnists have met up with Deborah and James and I featured them way back in April 2010.

While all bespoke shoemakers are to a degree governed by their clients’ whims and fancies, you can’t deny that Carréducker is one of the more original bespoke shoemakers out there. There is something rock ‘n’ roll about their shoes, an odd feature considering James and Deborah are devote fans of BBC Radio 4. 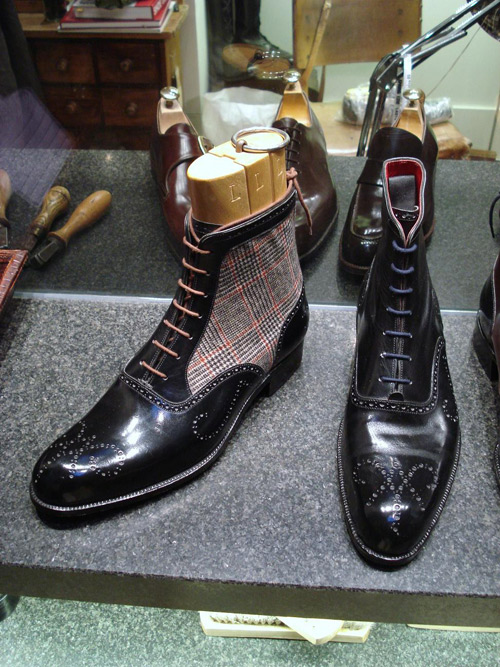 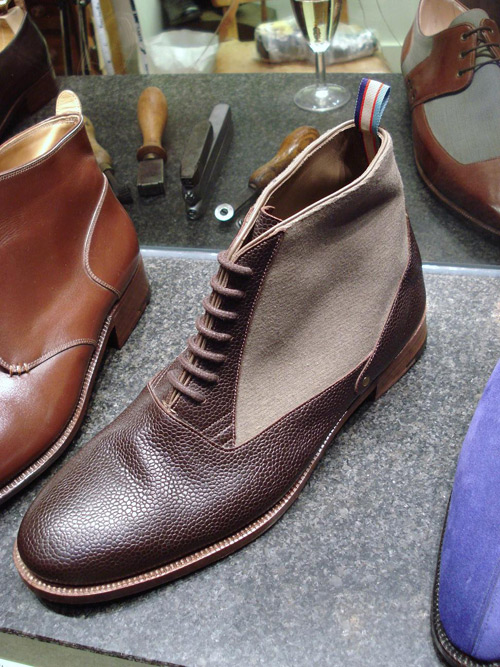 Partnering with Gieves & Hawkes seems to have brought them a great deal of recognition, but it’s no more than is deserved.

The remodelling of No. 1 Savile Row has provided them with a small studio space on the main floor where each day you can see either James or Deborah going about their craft. While they both refer to their space as the fish bowl, Gieves deserves to be congratulated for maintaining the essential connection between the customer and the craft which was a wonderful feature of the Carréducker experience when I first met them. I’ve been racking my brains but I can’t think of any other bespoke shoemaker in London where the patron can actually see his shoes being made.

During our chat Deborah indicated that there were some exciting collaborations in the pipeline. Although they’re for now hush-hush, I’m sure Mensflair will be granted an exclusive when the moments ripe (what do you say Deborah?).

One interesting project we can talk about is a collection of off the shelf classic shoe styles, from which clients will be able to pick and then have made bespoke. While style aficionados might relish the chance to choose each and every detail of a bespoke commission, I know plenty of men for whom this would be a nightmare. Still in development it will be interesting to see these shoes when finished.

Gieves & Hawkes have extended their commitment to footwear still further by allocating shop floor work space to an interesting American chap by the name of Justin FitzPatrick. Creator of the blog ‘The Shoe Snob’,  and a very nice fellow, Justin not only designs and makes his own shoes but is something of an expert at polishing them. It is this last service that he provides for customers of G&H. I’ve been enjoying his blog recently and his hand polishing is most impressive. Personally I don’t much enjoy shinning shoes, but with Justin’s prices starting at as little as £5 he may well become a new best friend.