Clothes With (A) Character 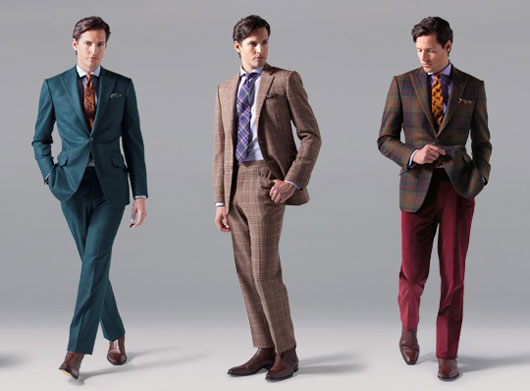 One morning, a gentleman by the name of Paul Stuart awoke, put on his navy worsted suit with a solid grenadine tie and brown wingtips, only to find upon arriving at his shop that it had already been opened for the day. Venturing in, he found his son, long gone jet-setting all around the world, waiting for him in a very sharp pinstripe suit and a wild plaid tie at his neck. “Where have you been, and where did you get that suit?” his father quickly exclaimed. “Everywhere and Right Here” was his son’s response.

This ‘errant son,’ as Paul Stuart describes him, is Phineas Cole, the fictional inspiration for Paul Stuart’s more youthful, adventurous collection. Rather than asking a high-profile fashion designer to do what he has already been doing for years, and then slapping a classic label on it, Paul Stuart took a slightly different route. Without abandoning the heritage and classic focus that makes Paul Stuart such a mainstay in traditional men’s dressing, it found a way to reach out to new customers who might be looking for something a bit different. Paul Stuart invented not only a new line of clothes, but also a new exemplary customer to wear them and symbolize them. I find this immensely inspiring. Our clothes are not only a reflection of who we are, but we are also to some degree defined by how they present us to the world. Phineas straddles this line gracefully and with ease.

While most designers might describe “The So-and-So Man of This Season” is doing this or wearing that, Phineas is a more intricate persona. He is a young, vibrant, adventurous man, probably somewhere in his late twenties to mid thirties, who spends his days as the always-gentlemanly life of every party, no matter where that party may be. You are not just entering into a season’s unifying aesthetic, but also a lifestyle and attitude. It is this idea of expressing a particular lifestyle or ideal through one’s dress that made me fall in love with the idea of Phineas Cole the first time I came across it. And, it so happens, his is a lifestyle of living life to the fullest and pursuing the best no matter where it takes you – and I can get behind that without a moment’s hesitation. As you can see, their marketing is working quite well on me.