Following on from the first article, examining the rarely seen collars, an exercise which attempted to reintroduce those neglected models to the gentlemen of great and grand style who read these pages, we now turn our attention to the other consideration in collar selection; the question of formality.

The stiff, starched collars of the early twentieth century, once worn daily by all – men of leisure as well as men of business – began to be used merely formally; and by the less fashion conscious, possibly late Victorian dinosaurs, still clinging to their starched Butterflies and High Imperials. The softer collars that became popular in the latter part of the easy-going 1920s, were sportier, more youthful and much more practical. Without doubt, the beguiling and intriguing ‘Lost Generation’ should take a good deal of credit for the popularity of sportier collars such as the button down that featured as part of the Ivy League uniform at Harvard, Yale and Princeton; worn with sporty blazers, flannel trousers and saddle shoes. 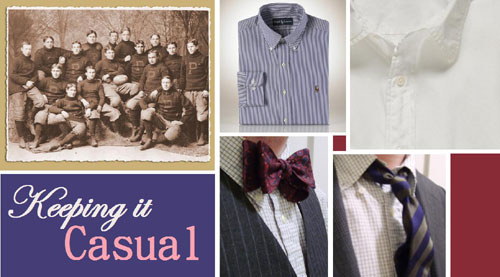 The softer collars of casual shirts, available up and down the high street, are often preferred by the gentleman with less tolerance for the ‘starched and severe’; academics, poets and journalists have historically been associated with such collars. They are a friendlier and cosier collar; carefully placed informality has a knack of softening one’s image. The button down is one of the most popular styles of the ‘not-so-formal.’ Although many choose this type of collar for use with suits of a greater formality, it looks a little out of place in such ensembles, unless it has an entirely unique and distracting feature – such as an unusual colour or a white collar – and I believe it looks far better with bow ties than with ordinary neckties.

The other softer collars can look good with or without a tie but there is a danger in pairing them with jackets of a smarter category; they get rather lost and tend to disappear under the lapels. Although it shocks those of an entirely traditionalist persuasion, I actually think that when wearing a necktie with such shirts, it looks better when the top button is unfastened. The idea of treating this collar in the same way as a more formal one is a little short sighted. Treat it as a rebel and it will serve its wearer well.

In writing of the dominance of the cutaway or ‘spread’ collar, I neglected to mention how satisfied I was to see that this collar was appreciated by so many. I personally love this style of collar, particularly the Windsor style with a greater ‘spread’, and considering how versatile it is, I am pleased to see it in such large production. The magic of this sort of collar is that it is appropriate with or without a tie – without, it is formal enough itself to stand up to the jackets that the softer collars were unable to match. It also pokes out well underneath V and crew neck knitwear, making it far better to wear in smart casual ensembles. However, this versatility does not stretch across the entire line of cutaways. The ‘extreme cutaway’, notable for the obtuse angle, is often referred to simply as ‘the cutaway’ as it is the only collar that goes beyond the horizontal line of the spread and is ‘cut away.’ It is a very formal collar and in actual fact, impinges on the rest of the shirt so little, that it looks rather like an antiquated high collar – this makes it appropriate for the most formal of occasions (such as morning dress) as well as office wear. It looks less appropriate for very casual occasions; formal accessories such as a silk scarf or cravat, tied around the open neck, might alleviate the unsuitability.