Shirt selection is undoubtedly one of the most baffling clothing choices to the merely curious or “just getting into it” clothing aficionados. As soon as you start to take the shirt seriously, as soon as you open your mind to the possibility of variation and alternation, the dazzling prospect of a Jermyn Street afternoon can become a sorry and frustrating experience; if one were interested in price alone, one could choose from several manufacturers who sell good standard formal shirts at or around the £30 mark ($43). Even then, the sheer volume of shirts tipping from the shelves is enough to make any gentleman not experienced to the perils of shirt shopping retire from the field of battle long before the assistant has reached for his tape measure.

So what is the problem? Well, in these days of permissibility and choice (a deadly combination) even the conservative arena of formal shirts is open to exploitation; small checks, large checks, wild checks, stripes, wide stripes, houndstooth – all fair game in the shirt business. The only thing that seems to have been lost in the melee of pattern hunting, barrier pushing and tradition shirking is that the collar – the poor old collar – receives comparatively little attention from buyers. The spread collar is now the norm, allowing for the growing legions of Windsor knot fans to properly display their silk. “They’re also good” a friend informs me “for wearing without ties – just a jumper and jeans.” Why? Well, apparently, in comparison to the ‘sad’ looking old English collars which were popular in the early decades of the twentieth century, the spread collar looks more robust and stands very well under v and crew neck knitwear. I would tend to agree with this. The contrast of formal shirts with far less formal jumpers is actually rather satisfying.

However, there are so many options for collars than the stock in evidence in our stores. Ralph Lauren, the eternal paramedic of fashions past, often pays homage to collars and styles of yesteryear with his Polo and Purple Label collections and tab, bar and club collars have all featured. Here are some examples of the rarer collars, most of which have vanished from the bread and butter clothing stores of the high street.

The long way down 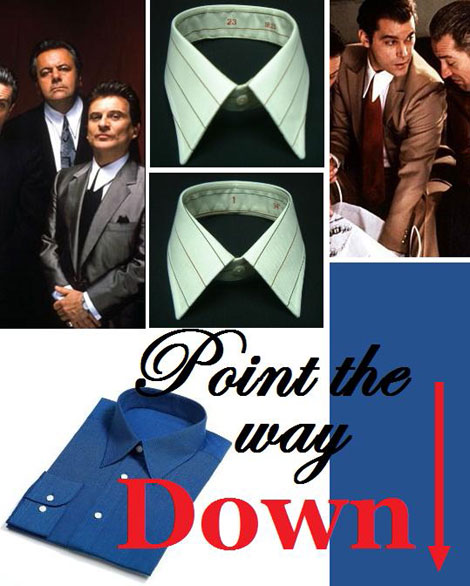 The ‘Goodfella’s’ collar is a particularly extreme version of this type and is rarely seen but even the classic ‘pointed’ collars are increasingly hard to find since the spread became king. A good litmus test for the popularity of a collar type is to examine the intentionally trend ‘conscious’ clothing decisions of national leaders – i.e. the decisions of their image consultants. The pointed collar was scarcely visible at the last EU summit; nearly all collars were at least slightly spread. It’s true that the pointed collar leaves far less space for an extravagant knot, which happens to be the favoured knot of the moment – a decisive factor in its decline. 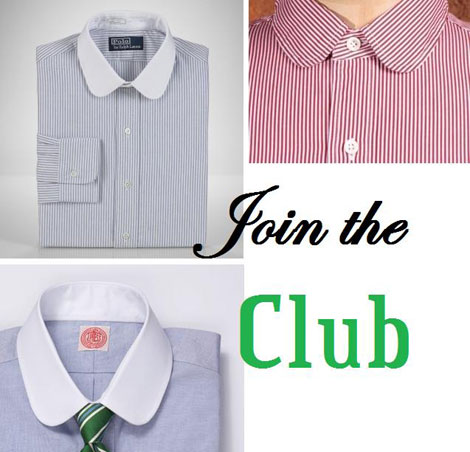 The club collar is one of the nattiest collar designs, also known as the Eton collar due to its association with the once-upon-a-time uniform of the school. I think it deserves a revival. Often worn in the French collar style – white collars and cuffs – it is remarkable how much a little curve can change the effect of a garment. It looks, at once, boyish and antiquated. It has character and, among the masses of spreads, individuality. Appropriate for casual prep or formal elegance, with a bow or standard tie, the club is statement of a quiet determination to be unique. 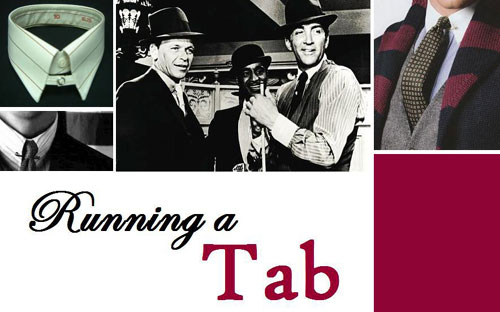 The tab collar is a cousin of the pin collar – both secure the pointed collar beneath the tie knot, thus allowing the tie to protrude properly from the confines of a pointed collar. This type of collar was popular in the 1920s and 30s, and again in the 1950s with, among others, Frank Sinatra. It appears a little grander than the plain pointed collar as it encourages tie display, and promotes a good tie profile by securing it in place.