As I was hurriedly dashing to and fro on a recent afternoon, negotiating my way through armies of tourists on the little side streets of the West End, I spotted a smartly dressed man reclining in his aluminium chair outside a particularly insalubrious looking establishment in Soho. A coffee cup, stained and empty, sat on the table in front of him and he had affected the position of reverie; leaning back into his chair, his legs crossed at the knee and his head thrown back against the top of the chair providing him with a view of a changing sky and the grotty upper floors of unkempt London buildings.

I noticed particularly a colourful item of clothing he happened to be wearing. It was not his thick, golden silk tie or his bright pink linen pocket square. Nor was it his cool navy linen blazer that was draped artfully over his shoulders. It was his pair of emerald green socks that shined with magnificent phosphorescence next to his burnished walnut brogues. This image of green clad ankles was vividly arresting. I would soon encounter other gentleman, of little note sartorially speaking, whose ankles were clad in more predictable blacks and dark greys and since I had seen two of the most resplendent and well-decorated ankles in London, it was all rather dull. I came to the conclusion that coloured socks are not only acceptable, but actually preferable; if the occasion allows it, a colourful flash of lower-leg is dazzling. 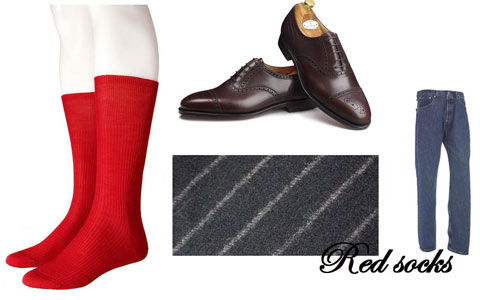 It is not unusual to see gentlemen, particularly well-dressed elderly gentleman, wearing burgundy socks. They are commonly found amongst the post-prandial recliners in the libraries of Pall Mall clubs, worn with a conservative charcoal chalkstripe and chocolate Oxfords. However, I have also seen blood red socks worn, rather nattily, with seersucker suits and also with washed denim; the dramatic red draws the eyes to the ankles. It’s chic but also rather daring. 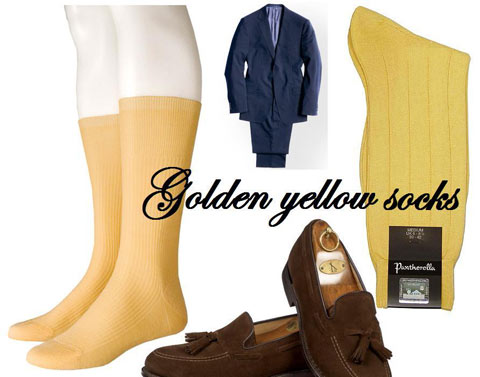 I happened to be tuning in to the opinions of a former Prime Minister and, whilst he was not by any means remarkable in dress, his socks – of a rich, golden yellow colour normally seen on Van Gogh paintings – were outstanding. Whilst red is eyecatching and a little cavalier, golden yellow seems to convey an aristocratic superiority, particularly when worn with blue or navy suits. A man’s ankles are glorified in such manacles of gilt; putting one in mind of the gleaming sandles of the messenger of the gods, Hermes. 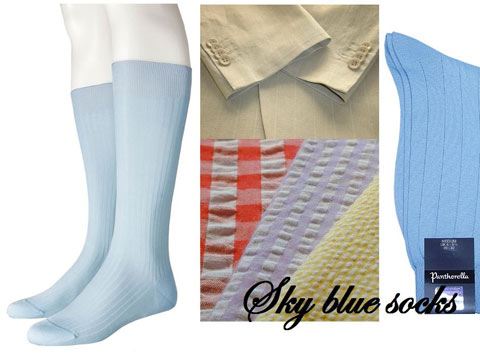 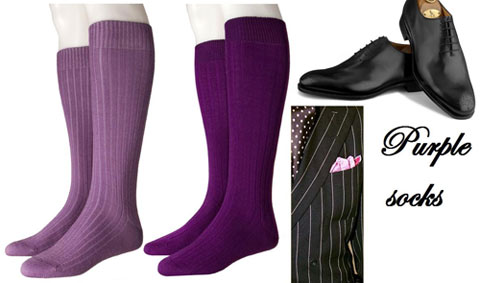 Of the trio of colours suggested, sky blue is certainly the more restrained. However, such a colour still looks magnificent with white buck shoes and a khaki coloured linen suit for more casual, leisure oriented days. It is certainly a spring and summer colour of sock, reflecting the glorious azure of a warm afternoon sky. Winter greys, dark browns and blacks do not flatter these socks; they look a little lost amongst the gloom. However, a winter equivalent might be a glorious lilac or purple, both of which look absolutely regal with a wide pinstripe navy suit.