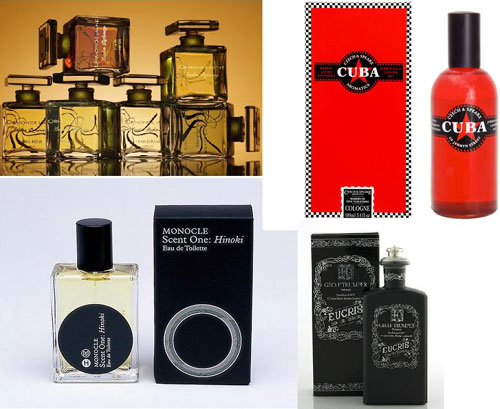 It’s funny the things you suddenly realise you don’t know. As I made clear on Bespokeme this week, I’m on the hunt for new scents, having tired slightly of my current signature. The one thing I have learned is that it’s a whole other world out there, with its blogging enthusiasts as passionate and as dedicated to detail as those of us enthralled by tailoring and style.

However, the first bit of basic knowledge I’ve now got under my belt is why one scent might last a day while others merely a few hours. As a smoker – no I haven’t managed to quit yet – this happens to be an obsession of mine. Additionally, I really don’t see the point of unburdening my wallet on expensive scents that last but a few hours.

There are certain anatomical factors that determine how long a scent lasts. They take to people’s skin type differently, so there is a certain amount of luck involved. You can weight the odds in your favour by layering products, such as using the same scented body wash, deodorant and moisturiser. Alternatively put some on a comb or brush and run it through your hair – it absorbs the moisture better than skin. The other factor is the strength of scent you pick, and this was the bit on which I was a little hazy – or rather, I had hitherto met with success purely by dumb luck.

I may be entirely alone in my ignorance but just in case, you have five types of scent; Aftershave, Cologne, Eau de Toilette (EDT), Eau de Parfum and Parfum. The name is a guide to the percentage of essential oils in a mixture, and the higher the concentration of essential oils, amongst other things, the longer the scent is likely to last.

Aftershave: This is the weakest of the bunch. Typically containing 1-3% concentration of oils you can expect it to last roughly 2-3 hours. It will often contain other ingredients, like Aloe, designed to help sooth the skin after shaving.

Cologne: Typically a 2-5% concentration these will last a little longer, but not much more and it is advised that you use them like an invigorating spray. They are also better for the skin after shaving than EDT’s and EDP’s. Now this is were it gets tricky; apparently many scents labelled Colognes are in fact Eau de Toilette’s; many but not all.

Eau de Toilette (EDT): Scents in this group apparently work best if you place them on pulse points. In fact owing to the higher concentration of oils some advise avoiding the face all together –especially after shaving. A concentration of 4-8% they should last 6-8 hours.

Eau de Parfum (EDP): Also works well if placed on the pulse points. Some advise spraying it into the air and stepping into the scent cloud. A concentration of 8-15%, sometimes higher, and will last all day –certainly that’s what I’ve found with Ormonde Man. These are quite hard to find and you pay a premium for them.

Parfum: In men’s scents this is like hens teeth and even harder to find than EDP’s.

What I have realised is the more I read the less I know – which I think is a song lyric. More work.

An Expert’s Guide To Aftershave Balms