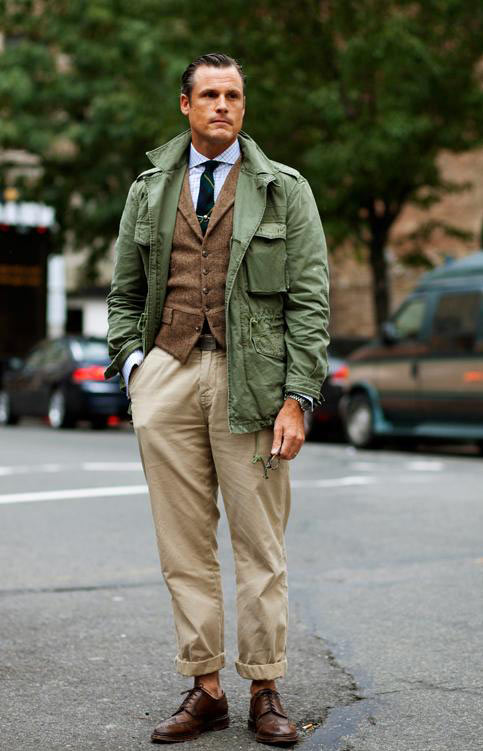 Contrast is one of the most effective weapons in a man’s wardrobe arsenal, and I don’t just mean the contrast of colour or texture either. Some of the most successful looks I’ve ever come across stemmed from an alignment of two or more items which were the antithesis of one another.

For example, back when I was policy advisor to the Shadow Minister for Shipping we went down to the Southampton Boat Show as guests of the Royal Yachting Association. Needless to say we were climbing in, out and over yachts all day (all built by British companies in case you wondered what this had to do with politics). Despite this activity it was still a business day so I dressed appropriately: DB navy blazer, cornflower yellow chinos, shirt and tie plus deck shoes.

I thought I looked quite good – a bit clichéd – but good nonetheless. That was until a spotted a chap emerging from one of the sailing yacht stands in stonewash jeans, white polo shirt, a red Gill heavy duty offshore sailing jacket and a pair of chestnut cowboy boots. To my mind he looked as cool as the proverbial cucumber.  The boots and Gill sailing jacket had absolutely no business being put together, one was most definitely of the sea, and the other of the land. The boots were also impractical for use on a boat’s decks. But it just looked good, and right. This is the art of contrast.

It’s a hit miss affair of course which is difficult to explain. Though I’ve tried to rationalise the process of contrast I’m yet to succeed, and certainly not in any form that makes sense written down. In some ways it’s about taking all the rules you know, all the experience you have of dressing well and then just going out and trusting your instincts, with a healthy dollop of ‘oh, fu#k it’ thrown in. 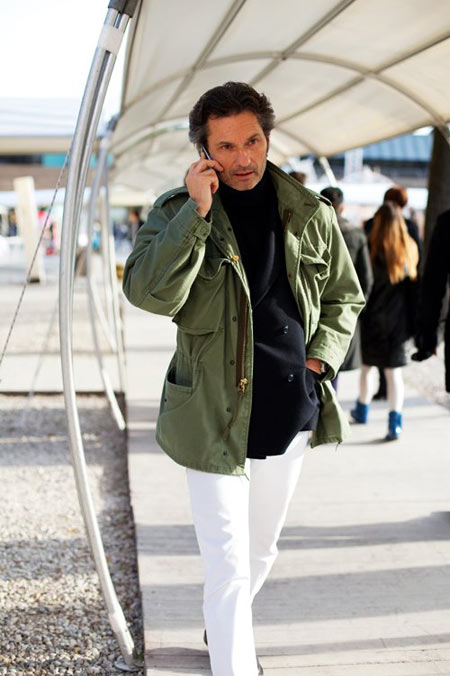 The reason I mention all this is that my new obsession for the coming season is a vintage cotton M65 combat jacket. I’m sure former military personnel may resent my choice of garment, given that I’ve never served in the military, and certainly not the US military. But in this particular case I’d regard those objections as akin to someone telling me I ought not to own a Land Rover as I’d never served in Her Majesty’s Armed Forces. And while a few examples are out there complete with platoon insignia I’m not after any of that.

The jacket has a strong aesthetic and is, largely thanks to a succession of war movies, an instantly recognisable garment. Indeed, in England many people would recognise the aesthetic without necessarily knowing why. I’ve seen it contrasted with suits, blazers and tweeds to great effect and this is what I’m after.

In my own case I want to try it with an RAF blue suit, Tobacco brown half brogues, white shirt and black knit tie. This may not work as a look of course; but the fear of failure is far worse than failure itself.