The World Is My High-Street: Cordarounds, San Francisco 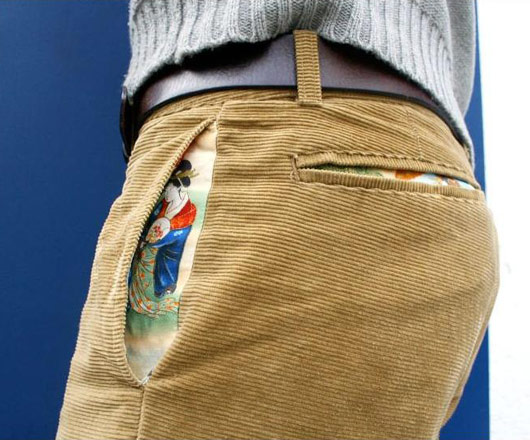 It is natural that living in London with a bias towards independent retailers I should concentrate on what I find here. However, I’m conscious that there is a world elsewhere, and derive just as much pleasure from finding independents from the four corners of the globe.

So I thought this a perfect forum to highlight a San Francisco based outfit I’ve been watching for quite a while.

If Graham Chapman, John Cleese, Terry Gilliam, Eric Idle, Terry Jones, and Michael Palin had thought to disregard comedy and instead make trousers, I think Cordarounds would be the result. Calling themselves a Microbrewery, but with clothing, they’ve turned the world of cord trousers on its head – or rather to a 90° angle – with their range of horizontal needle cord jeans, which feature exotic coloured linings to the pockets, and the promise to “drastically lower your crotch heat index”.

Founded by Chris Lindland in 2005, and recently rebranded from Cordarounds to Betabrand, this design studio of two produce clothes in small batches of a couple hundred items which are then made up in San Francisco and sold online – although they do ship worldwide.

There is a madcap energy to this company that I can’t help but find appealing, and which leads to some highly original menswear; whether it be the aforementioned cordarounds; the seersucker trousers and shorts; reversible smoking jacket or their Bike to Works Pants, featuring luminescent pockets and cuffs for cyclists safety.

All of this innovation is delivered in an irreverent self-mocking style; their own scientific studies show that the pocket linings of their reversible smoking jacket are substantially softer than “a silk worm’s anus”, or “a freshly laundered bunny”, (some claim).

This is one of those brands that you’ll either love or loath, personally I love them and have just ordered a pair of their $90 Khaki Cords, although silly walk is not included.