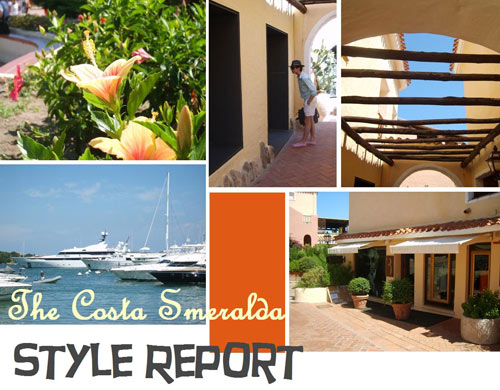 On my recent travels to the Costa Smeralda, surrounded by holidaying Italians of varying social position and wealth, I came to the happy conclusion that I was satisfied to be born an Englishman. Not for the dreadful weather, or any of those boisterous and brutal reasons of base patriotism. But I was satisfied that I was in a better position than an unfortunate Italian gentleman who has grown up in the magnificent shadows of Renaissance churches, in the glorious vineyards of Tuscany and by the shores of the ‘Emerald Coast’, merely to woo a woman who considers the vulgar display of ‘designer’ labels (literally labels in some instances) to be the epitome of style. In a sunglasses store in the oddly manicured but pleasant Porto Cervo, a group of Italians walked in. The women, separating from the men, gravitated towards the ‘big brands’; big lenses, big designer name on the arm. The men looked around casually but their interest in glasses was less to do with the conspicuousness of the designer name and more to do with the construction and shape; they held the glasses, folding and refolding the arms, inspecting the profile like a ship’s architect admiring a model of his latest project. For me, this was illustrative of the difference. Names for the girls, design for the men.

The Costa Smeralda is a picturesque place; an unspoilt playground for holidaymakers attracted by the tidy towns, rugged and soaring landscape and the general feeling of ‘quiet safety.’ To call it a stylish destination is perhaps being rather generous; there is certainly a focus on fashion, but there is also as much of a focus on spending money and displaying money – activities which cannot be singled out by a soul as complete evidence of ‘style.’ There is definitely a naïve confusion in towns like Cervo and Rotondo, a confusion which seems to filter down, unfortunately, to the less well off Italians who push their children’s perambulators past 200 foot yachts in silent reverence. This ‘confusion’ is rather best summed up by a line from the song ‘Big Spender’; “The minute you walked in the joint/I could see you were a man of distinction/A real big spender.” The wealthy Russians visiting this coast remain as true to this dogma as anyone; the oligarchs’ massive vessels lurk in the Cala di Volpe and more than a few own properties here.

One of my companions commented that there wasn’t nearly as much style on this particular coast as on Capri and I certainly agreed. When the sun went down, Capri was replete with colourful style; the Costa Smeralda was rather different. Whereas on Capri, an island drenched in ancient decadence and offering glorious beauty, there was less evidence of label gluttony, Costa Smeralda was epitomised by the desperation of many to contrive importance and significance from decorating their bodies in garish and crass designer names. Money plays the best cards on this coast; and attention is courted, sadly, not from eye-catching style but from evidence of a deep wallet. This is a place upon which wealth has been thrown like confetti but there isn’t the same result as a Cap Ferrat or Capri; no old Profumia and few shops selling high quality holiday clothing. The usual suspects; Prada, Dolce & Gabbana, Armani and even Billionaire (the brash brand launched by the Costa’s maitre’d for the super rich, Flavio Briatore) are here but it doesn’t feel organic or natural to have them here. The shops are closed throughout most of the day and only open in the evening to the throng of tourists, eager to catch a glimpse of an Italian celebrity or a Hollywood filmstar. The landscape and situation of the towns provides inspiration galore; this is indeed a very attractive part of the world to doze through a summer. However, the fabrication has resulted in predictable smatterings of overpriced leathers and clothing frequently offered at prices greater than those requested in the world’s capital cities. The Costa Smeralda has cash aplenty but, like a number of its visitors and residents, it badly needs style.