A Study in Patience and Craft: Interview with Adam Atkinson of CHERCHBI

A while ago I highlighted Adam Atkinson and his range of British made bags comprising a unique cloth made from the wool of the ancient rare-breed Herdwick sheep. Patented as Herdwyck No.10, the cloth is the product of 3 years trial and error.

While Adam and his business are currently based up in Kendal (home of the mint cake), on his most recent visit to London I caught up with Adam to discuss his bags, business and Herdwyck No.10. It also offered me a chance to see the range of bags in the flesh. 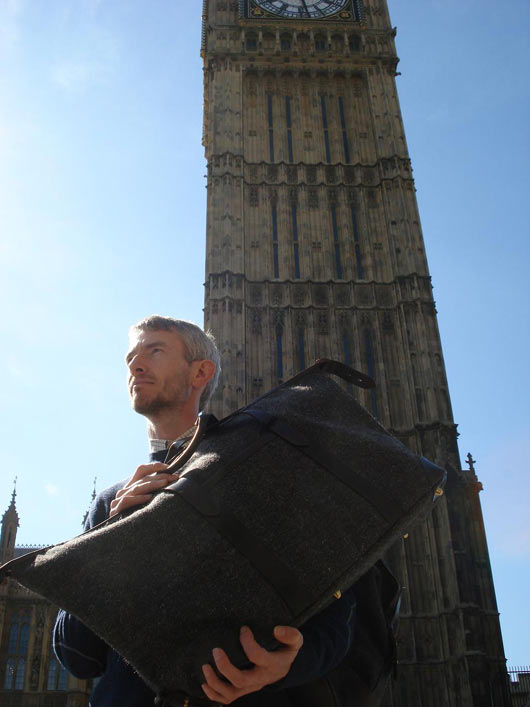 Adam is a wonderfully approachable and down to earth guy, who two weeks after our meeting eloped with his fiancé to Gretna Green to wed and spent his honeymoon in a camper van driving around Scotland.

Having undertaken a fashion and marketing degree at Newcastle University the first years of Adam’s working life were spent in the marketing, sourcing and design departments of first Nike and then Puma.

It was his time at Nike that set him on his current path, albeit in a round about way. Much of his time was focused on production in China, and increasingly he despaired of inhabiting a world which was focused on making more and more petro-chemical based product faster and cheaper. He quit and returned to Kendal, England, determined to set up his own venture, although he knew not what.

CHERCHBI took some time to come to fruition, but that desire for something better, with an emphasis on nature and craft, has in my view resulted in a range of bags that is truly remarkable. They also have a natural beauty which encapsulates this most beautiful part of England’s green and pleasant land.

Many brands strive for the prefix luxury. Many more through clever marketing successfully bestow it upon themselves. In truth almost none deserve it. CHERCHBI is an exception. Whether we’re talking about the difficulty of producing the cloth, the use of locally sourced materials or the time taken to get the curve of shoulder straps just right, these bags are genuinely crafted and that makes them deserving of the prefix luxury. 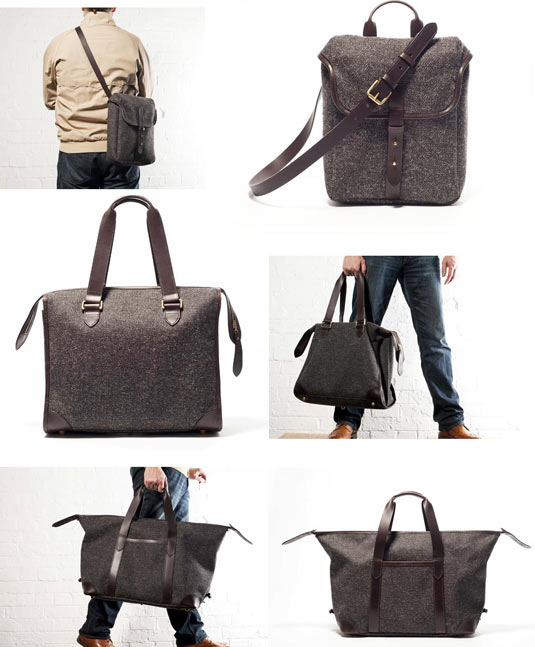 Where does CHERCHBI come from?

Adam Atkinson: CHERCHBI was the name Kendal was recorded as in the Doomsday book, it means “by the church”. I tried to trademark Atkinson and failed because of Atkinson ties.

The thing that interests me is the fact you’ve gone to such trouble to make sure everything is made in Britain. Was that a conscious effort or merely and a feature of locality.

Adam Atkinson: Yes it was intentional. It was one of the first decisions I made that everything would be made in this country. From a point of view of having a particular interest in British manufacturing, my father worked at K Shoes for 40 years, my great-grandfather was a leather worker based in Kendal. Other members of the family from Coniston are sheep farmers, tailors, arts and crafts carpenters etc.  There’s a history of small scale manufacturing and making things within the family. I wanted to learn more about local manufacturing – leather goods, textiles. I wanted to create a simple, high quality back-to-basics product – I love visiting the likes of antiques shops due to the high quality of the products they sell.  I set my stake in the ground, it’s got to be British made and “CHERCHBI, British Made” appears on everything. There’s a lot of products I have available, for example, woven linens from Lancashire, silks from Macclesfield. The toggle on this bag I get made by Abbeyhorn in Lancashire, the same company that supplies Albam and has been running since 1749 through five different families.  I don’t claim to be an environmentally sound brand, it just comes naturally and is ingrained in the business.

Is the environmental aspect quite important to you?

Adam Atkinson: Yeah it is important to me, it’s a complex area really. I’ve come from this background of making more and more products out of plastic. Why are we producing more and more products in a seasonal basis, you know 5 seasons in a year including the holidays for Nike and Puma, and the quality level reducing all the way along. I was just thinking this is all wrong. So I moved back to the Lake District for a bit of a break and started freelance design work. I read an article in the local paper about farmers burning Herdwick fleece.

That was going to be my next question, where exactly did the idea come from?

Adam Atkinson: Part of the reason for me moving back was to be closer to my family and go back to my roots. I was 37 when I moved back and thought this is an import junction in my life, I’ve got an opportunity to quit a job and not start a new one and just have a month or two to look around and see what direction I wanted to take. I read this report that mentioned Herdwick which I’d heard of but didn’t know much about.

Yes, I did wonder whether perhaps you were a disgruntled farmer with a shit load of wool you were trying to get rid of…

AA: (laugh…) No, no I’m not. I spent a lot of time in the Lake District as a kid, my Dad was a member and is the chairman of a local walking and mountaineering club, they have this beautiful old building at the top of the Borrowdale Valley and we used to have family holidays up there.

The name Herdwick comes from old Norse meaning “sheep place”. Going back there’s evidence of sheep farms in the Lake District in the 8th and 9th century, so it’s an ancient breed, one of the oldest British sheep breeds. People were starting to offer it in restaurants on menus. The Queen’s a fan of our meat. Within foodie circles it’s famous and has become more so over recent years, it’s a great meat. But it’s [the wool] got the lowest price on the British Wool Marketing Board price scale. Farmers have burnt it in front of the BWMB just to prove a point.

What is it about the wool that means no one else wants to use it?

AA: Well it’s got a short staple length (the length of the fibre) which is bad for weaving. The best Egyptian cotton has a long staple length which is great for weaving so you can spin it round itself and create a fine thread. This [Herdwick] is the opposite, it’s very wiry and abrasive so you can’t really use it for garments, everything is wrong with it. But it has a great texture and natural colour. You have this white fibre which is dead thread (kemp fibres) and snaps easily. The kemp fibres drop off during any sort of spinning and weaving which makes a mess of the machinery. Spinners and weavers don’t really like to work with the fleece.

So presumably when you tried to weave it into a cloth you had to overcome a huge amount of resistance?

AA: Yeah, I’ve gone through 9 different trials over 3 years. There were three different weaving/spinning companies and then different trials within those three to get the spinning technique, the weaving technique and also to find the right spinning and weaving partners prepared to pursue the project and make a finished cloth. We put extra picks in the looms meaning we have extra warp and weft threads in the yarn so it creates a denser cloth, this slows everything down. The other thing we do is get more twist in the yarn. Because it has a short staple length you have to twist them around each other more to get a stronger yarn and that means slowing the machine down to achieve that. Because the fibre has lots of bits sticking out all over the place they twist on top of each other during weaving which is not a good thing. So we wax them, running every yarn over small tea lights to lubricate it as it’s going into the cloth. And a lot of other tricks as well. This is why at the end of it all I thought “gosh that was three and half years of my life”. I was freelancing at the time but putting a lot of other things on hold, putting my life on hold really. I moved back to the Lakes, into the family home, all my freelance money was being ploughed into the new cloth and developing the product. I was single at the time so living a monk’s existence, but thoroughly enjoying it.

AA: So that’s the finished cloth, we take it and back it with a natural rubber and then the cotton backer, so that’s an impermeable layer which water will not pass through. It will hit the wool but won’t get though to the cotton backer, protecting what’s in the bag, which is a great feature. It also stabilises the cloth, which has been tested for abrasion pulling and it passes for apparel and upholstery.  It’s a tough old cloth and when you put the backing on it, it becomes even tougher and you end up with something really robust.

AA: After the 3 and a half years and 9 weave trials I thought the cloth deserved a name of its own, so I’ve named it Herdwyck No. 10. It’s a licensed cloth and registered brand. There is a bit of interest from other company’s to do something with it. At the moment they see the bags we’ve got in the collection and they want to do something with it but I’m not really prepared to do that right now.

Do you do all the designing yourself?

AA: Yes I do. Essentially, the business is just me right now. My partner is a hair stylist but she’s worked in fashion before, she has a knowledge of design which puts me to shame and has a taste level which suits what I’m doing. I’m very lucky to have her influence and eye to detail.

And design influences? Obviously you’re based in Kendal in the fabulous Lake District, are you going back through old mountaineering catalogues…?

AA: Although I’m inspired by certain pieces in different areas and certain vintage pieces, it’s all new and designed with a contemporary function in mind. For example, this backpack is based on a mountaineering pack. There are elements that are shamelessly old fashioned, the full leather strap without padding, but they mould and give over time and are very comfortable. The stitched strap on top is pretty standard military bag construction, tried and tested, but I designed it with the Gothic arch. It has a full leather base because I made the decision early on not to cut corners.

You’ve been picked up by Mr Porter and you previewed at Pitti Uomo, what’s next?

AA: We’re going to continue doing Pitti, that was a good show for us. It’s been a hard four years with no money, but now I feel I can enjoy the rewards, it’s great. I’m not sure the visitors to Pitti really got the whole story, but the first thing to attract anyone’s attention is the quality, the visual impact, the quality has to shine through. That’s the critical point. The price is an issue for a lot of people, but the prices are what they are. It’s authentic rather than fake and you know where it’s been made.