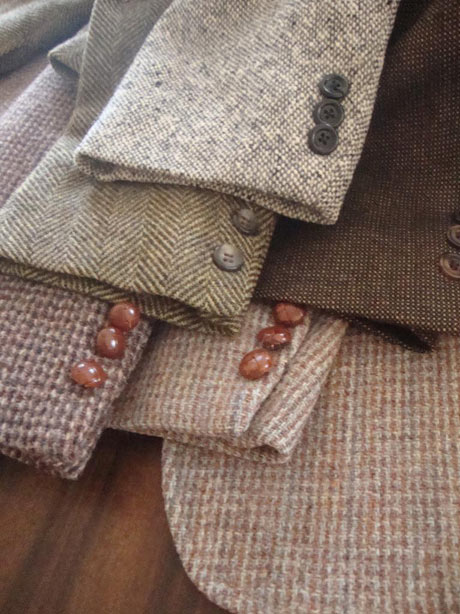 A few weeks ago I commissioned another piece of tailored clothing. I opted for a double breasted mallard green Harris Tweed jacket. The cloth has a herringbone weave with classic small flecks of colour running through the weave.

Typically, when one thinks about tweed cloth one thinks in terms of brown, green and fawn grounds, regardless of any overlaying checks.

After all, those colours reflect the origins and heritage of the cloth not to mention the rural nature of the clothes it was used to fashion. Curiously enough the term tweed comes from a London cloth merchant misreading the word tweel, the Scottish word for twill. 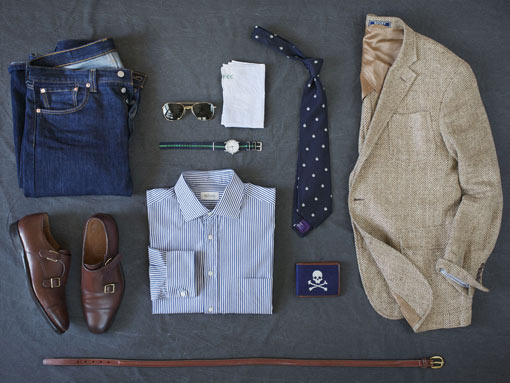 Proper tweed, anything over 18oz, is so tightly woven that it’s water resistant. As such the clothes fashioned from this hard wearing cloth were very much working items. The colourways of classic tweed were ideally suited to withstanding the rigors of a well lived life in the country: hunting, riding, stalking, shooting and fishing. And while the tweed clothes themselves varied in quality of manufacture so practical to the task was the cloth that it was enjoyed by both the country gent, gamekeeper and estate worker alike.

Of course since migrating to the town the practical necessity for tweed to be in earthy grounds no longer applies, and this is the interesting direction a friend of mine recently took. Much like the jackets pictured, he opted for a cream and very light beige ground overlaid with a pale blue window pain check. 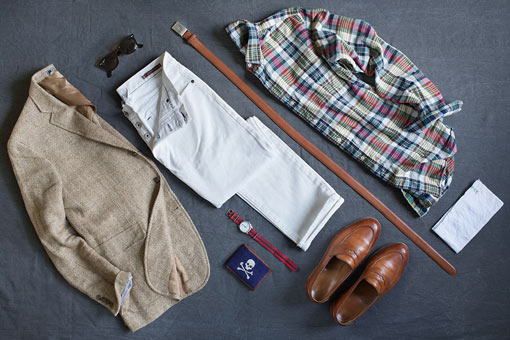 I wouldn’t risk such a colour scheme in the country but in town it really works. Not only is the cream a natural fit with denim, but the contrast of black asphalt and the concrete grey of the metropolis makes for a powerful contrast between the jacket and it’s urban background. Certainly a less conventional choice but ideally suited to the City.

Something to consider next time around I think.