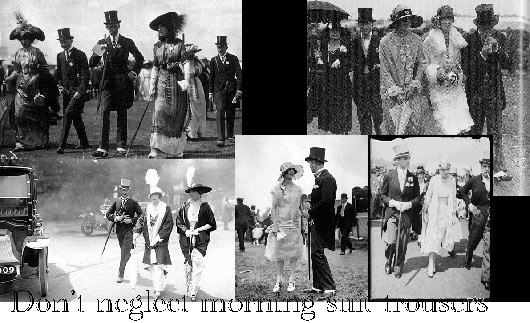 The morning suit, though a type of formal dress used on special occasions today, is very much an ensemble of the past. In its fullest splendour, when a gleaming top hat is the crowning accessory, it is a silhouette of the late-Victorian era, a visual symbol of the 19th century. The emblematic nature of its aesthetic both attracts and repels; traditionalists relish its deployment, modernists recoil from its antiquity. And though it has been modernised (shirt collars have changed, the cravat is now a tie), it still retains the crucial elements of the original; the waistcoat, tailcoat and trousers.

Of these, the tailcoat is the most mentioned. In fact, the entire outfit often goes by the simple reference ‘tails.’ Since short jackets became the standard everyday dress, the morning suit and white tie tailcoats have acquired a touch of curiosity; when fashion changed, they remained – rocks of formality against a tide of increasing informality. The waistcoat, once an essential and rather dull element of the ensemble, has become the ‘event’ piece, a novelty which has encouraged ever more outrageous colours and patterns.

The trousers, perhaps because they are entirely familiar, seem to be the most neglected element of the morning suit. In my recent article on the ‘Horrors of the exposed waistband’, I focused on the rise and wearing position of morning suit trousers; that they are commonly, and in my view mistakenly, worn like other trousers, particularly jeans. However, it is not only this but also the cut of the trouser leg and the break on the trousers that affects a rather slovenly look that is anathema to the heritage of the ensemble.

As heritage is what the look is all about, I turned to examples of morning dress as worn by those most familiar with its requirements; Ascot race goers from the early 20th century. The one thing that struck me about the beauty of the tailoring was not the elegant cut of the tailcoats or the high-cut of the waistcoats but the immaculately shaped trousers and the lack of a break.

Properly tailored trousers seem to be underrated by most. It is the tailored torso that seems to impress. However, poorly fitting trousers can ruin the appeal of a perfectly tailored coat and vest; this is about completing a look and there are no better examples than those above. The left photographs are from the Edwardian era, identifiable by the women’s spectacular hats; the tailcoat is close-fitting, the trousers are slim. The photographs on the right are from the 1920s and 30s; the tailcoat cut is similar, and though the trousers are fuller they are elegantly cut.

My own plan is to take a pair of double-pleated wool chalkstripes to the tailors to engineer a no-break finish and increase the tapering on the lower leg in an attempt to create the elegant finish exemplified by these gentlemen of history.