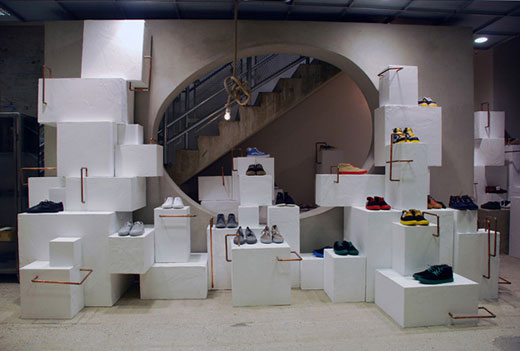 If last week’s recommendation, Albam, is the best of modern Britain then the Dover Street Market is the worst. Everything most awful is here; a belief that ‘new’ is a substitute for ‘better’; that manners and common courtesy are old fashioned and the concerns of others; the delusion that celebrity and fame make up for quality, and a willingness to pay vast sums to foreigners for what amounts to our own damn heritage. Add in a liberal application of ‘Hoxton Twat’ (follow the link for a definition) and that pretty much sums up Dover Street Market.

The shop is what might be referred to as a ‘concept store’. Applying the word ‘concept‘ to anything should be viewed with suspicion in my view. After all, global thermo nuclear war is a concept, it’s just a really, really bad one.

In this case, the ‘concept’ is to create a shop with the variety and unstructured, rough nature of a street market. To that end concrete floors, metal banisters and steel frames for hanging clothing seem to be the main accoutrements for achieving this.

I’d read so much painted prose about this place that I was keen to check it out. In addition, it’s the only stockist in London carrying a Mark McNairy shoe, the subject of a recent post, and I wanted to have a look before buying online.

To begin with, spread over several floors you have no idea where you’re going. Nothing is labelled.  There are no signs and no staff members willing to halt their conversions with one another long enough to offer assistance. I made for a stair case in the hope that it might lead somewhere. There I encountered a couple who were watching my movements as closely as I watched theirs; each of us hoping that the other might make some knowing move which would signify where to go. Spying some clothes I dashed through a doorway and found two assistants, who were merrily ignoring members of the public. Asking where I might find Inventory clothing I was treated to an up and down glance before the female assistant contemptuously spat out the word “basement”.

As I trudged back down through the shop, confident that at any moment I might find myself in the ladies toilet, I saw shop assistant after shop assistant ignoring customers to lounge around pretentiously while talking to their colleagues. Not once did anybody say hello, good afternoon or even acknowledge my presence, nor anybody else’s for that matter. I thought Hilditch and Key was the least hospitable shop in London, I was evidently wrong.

As to the stock, we’re talking the latest in street wear, new ivy and American work wear. This genre is something I take an interest in, and it was good to finally see items from Inventory, Junya Watanabe and S.N.S Herning. But for the most part it was over priced tat of indifferent quality masquerading as classics with a twist.

Having had enough I quickly left with a desire never to return. If it were a dining experience it would be a public bin with a French maître d and Gordon Ramsey hurling abuse at you from a darkened doorway.