Country Clobber: Dressing for the Countryside 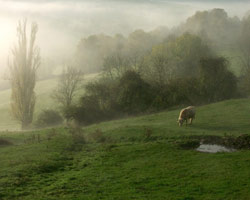 Picture the scene; it is a crisp October morning in the heart of the countryside. Birds sweep up into the sky, glowing yellow with the promise of new dawn; dew drops cover the grass and glisten like little crystals. Only the distant sound of running water and the cry of the geese is heard. The air has an unmistakable coolness to it, and each intake of breath feels like the cleansing of the soul.

Ah yes, the countryside. For an Englishman dwelling in the city of London, the countryside is a glorious retreat; a paradise that exists beyond the smoke and the brick walls. For Churchill, England was the countryside; the beautiful bucolic ideal of man existing in harmony with nature. For others, the countryside is nothing more than some trees and the odd charming view. Whatever it is to you, there is one thing that can be said. It is very different from the town.

I have always been an advocate of dressing for the surroundings and the environment. Clothing customs borne of centuries of tailoring traditions dictate that the man who dresses for the metropolis and the man who dresses for the country are two different men. Though I am inclined to believe that rigid customs no longer apply in this day and age of alternative fashions, there are certain rules that I am happy to abide by. And I abide by them not for the sake of conservatism, but for the sake of aesthetics.

To many people, a suit might mean one thing; two-button, single vent, black, basic cut, to the stylish gentleman, it means many things. Above all, a man should not consider wearing the suit worn in the boardroom to the shooting party at Carlton Hall. Minor rules in relation to turn-ups, never unbuttoning double breasted jackets and other such matters are important, but the fundamental test is whether a gentleman can distinguish between what is appropriate in Mayfair, and what is appropriate in rural Wiltshire.

Now a gentleman might not wear a suit in the country. Indeed, country suits are rarely seen except at race meetings and hunts. However, a gentleman should consider that despite the relaxation of rules of attire, in the name of aesthetics, there are limits to how much the town and country wardrobes can merge. 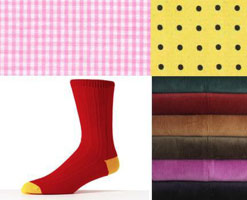 Firstly, a gentleman in the country is apt to wear more adventurous colours; a glance at the famous Cordings shop on Piccadilly will give an idea of how far into the rainbow some gentleman are prepared to advance. Cordings have been providing clothing for gentleman since 1839. Though they are noted for some City garments such as the covert coat, they are known throughout the world as purveyors of fine country clothing.

Passing their shop, I have seen cashmere jumpers in purple, bright red, royal blue and canary yellow. They offer bright red and green ties, bright pink gingham check shirts, socks of sky blue and waistcoats in forest greens. In the country, colour is the rule for the accessory items. Basic items such as blazers, overcoats, hacking jackets are, by striking contrast, very plain in terms of colour and form.

Though check shirts are often seen in town these days, I think Tattersall checks and some ginghams are far more suited to the countryside than the metropolis. There is a quaint quality to check and plaid which seems to belong to the innocence of nature. The cynical city is about stripes and plains; regal, and more formal patterns.

Ties worn in the country should never have those steely qualities of town; the greys and blacks do not belong there. Navy is as dark as a gentleman should go in the country with a necktie.

Paisley and striped accessories are suitable for both the country and town; they have that necessary universal appeal which makes them bold enough for city wear and cosy enough for autumn walks across The Downs.