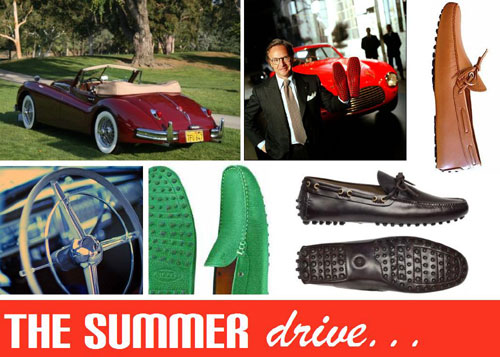 If you are a man who is resigned to the idea that you are unlikely to stop buying shoes, referring to a shoe collection in terms of completeness might be misrepresentative; I myself view my shoe pile in terms of progression, an evolution of sorts. It changes and grows as I learn and adapt; it’s not a question of simply adding further choice but adjusting to changing needs.

The warm season can be an awkward time for footwear. Though winter presents the difficulties of precipitation – lining wet shoes with paper, rubbing olive oil into salt marks – summer, though generally shoe-friendly, can be rather beastly for one’s poor feet. Wearing the stiff, dark brown lace ups that felt so warm and secure in November feels rather odd in summer’s warm glow; imprisoning one’s feet in such a manner is psychologically, as well as physically, suffocating. Lighter colours are of course an excellent idea as well as wearing more supple, softer leathers; espadrilles are very good for casual occasions but for the occasions of semi-formality (many of the social invitations I receive stipulate the rather dull code of semi-formal), another choice of shoe is needed; something youthful, practical and kind to swelling summer feet.

The driving shoe is a rather remarkable shoe sensation; remarkable that a shoe directed at such a small proportion of potential customers – persons who buy shoes especially for motoring – has inspired such mass appeal. Though in their current state it would be hard to argue that brands such as Car Shoe, Tod’s and Prada direct their products towards drivers only, the heritage of motoring is an attractive tool of marketing that adds purpose, though dubious, to the peculiarities of such footwear. Tod’s, long marketed as the “shoes with knobs on”, are considered to be at the top of the driving shoe tree – thanks to their extensive and lavish advertising campaigns, celebrity endorsements and ubiquity. Car Shoe, though owned by Prada, is a relative minnow; no Madison Avenue store, no Gwyneth Paltrow campaigns; just a couple of Italian showrooms and an attractive website. However, despite this apparent anonymity, Car Shoe products remain some of the most counterfeited shoe designs in the world.

Driving shoes are also appearing on the high street, with Massimo Dutti offering some of the best in design and value. The profile is rather simple, if a little crude; a moccasin with rubber studs for a sole. Some consider they look rather like slippers, and they are certainly as comfortable. Some are manufactured with leather laces, others without; those who prefer their loafers with tassels may appreciate the decoration of a little chestnut bow.

The best way to wear them is with shorts or with shorter trousers – when I see them paired with sloppy bootcut jeans, full chinos or baggy linen they look very lost. Bizarrely, though they are an easygoing shoe, pairing them with the aforementioned ‘easy going items’ is a mismatch. The ankle, or at least a little of it, should be on display and bigger trousers tend to exaggerate the informality of the design. Straight and slim fits are far more appropriate partners.