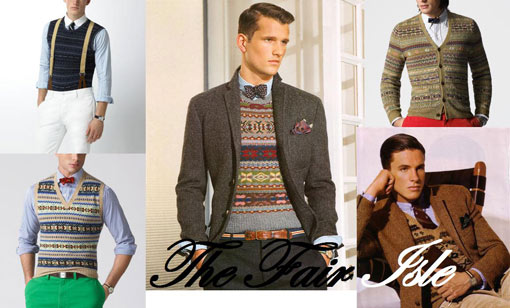 “You’re wearing a rug” shrugged a rather bored acquaintance of mine as I turned in front of the mirrors positioned outside the jute carpeted, well spot-lit changing rooms. He was, naturally, referring to a Fair Isle vest I had decided to try on. I very much liked it but my companion, a man ill disposed towards clothes shopping, viewed it as a fussy and unattractive non-necessity.

It is sometimes useful having a polar opinion. Not that it might help you to see the ‘errors’ in your judgment, but simply that it will serve to remind you why you have been right all along and why your own taste towers above that of the uninterested and blasé majority. When recalling this incident, it reminded me how two chaps of the same age, from the same school with the same cavalier attitude towards life could differ so strongly in relation to a garment. It was another dreaded case of sartorial love/hate.

I must admit that the Fair Isle patterns, whilst I find them charming, are certainly not for everyone. For one thing, they don’t suit many people; you have to have a sympathetic personality and more than a little personal flair to carry the look off. Horn-rimmed spectacles help. As does a crop of thick, floppy hair and though I possess neither of these things, I attempted to make up for it with beatific smiles and an attempt at cocky charm.

For a pattern so strongly associated with the unaware and crumbling old gentleman, youth, or at least a youthful demeanour is a requirement. It is a pattern I consider the clothing equivalent of Christmas wrapping paper; it is as important what is added to it as how it might be displayed. I think it is important to prep it up – wearing Bengal striped shirts underneath with crisp club ties and perhaps a slim fitting club blazer over the top.

I think it has looked its worse when worn, hobo style, over a white vest with perhaps a long black coat, All Stars and a beanie. This detracts from the innocence of the Fair Isle knitwear as something bright and quirky: something to be worn by a man with sartorial confidence and self-assuredness, not embarrassingly and begrudgingly with mismatched items from J.Lindeberg. This is not grandmother’s knitting, only to be worn in the holiday season; this is a fine design.

I think Fair Isle knitwear looks simply splendid with denim, blazers and driving shoes. I think it looks truly dreadful with Wellington boots and ancient cords, ballooning in the wind. If anything, a Fair Isle item of knitwear should be slim-fitting and sparing in terms of thickness. The ‘fisherman’s weight’ Fair Isle jumper, that knives have trouble in cutting through, should be avoided. This ungainly item belongs in the trunk of last resort; when central heating has failed the human race.

The photographs above, all from Ralph Lauren’s collection of Fair Isle items, suggest the right course for the use of the pattern: a clubby, Depression-era coolness with plenty of character (note the upturned collar and the cuffs).